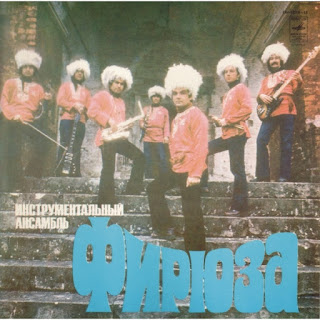 Zeuhl funk... in Turkmenistan?? Some crazy shit. This is a wild record with incredibly commanding dense-n-intense funk. Sometimes you'll get somber piano melodies, almost romantic in their proggy melancholy feel. Then it will randomly break out into sweeping Middle Eastern passages, commanding a fiery intensity while still keeping an endearing synthy cheesiness to it.
I once joked that if it was from Turkmenistan, it had to be good. Of course I was talking about the Gunesh Ensemble, and didn't realize there was a second progressive group from the same place and time. Three long tracks adorn this one of a kind album. Seven piece group with guitar, sax, flute, keys, violin, bass, drums and percussion. While not as hot or as entirely unique as the almighty Gunesh, this is still a fascinating fusion, one that reflects the unique culture of the Turkmen. I'm constantly amazed at some of the subversive sounds coming from the old Soviet Union. I'm surprised Boheme Music of Russia didn't reissue this with all the other great ex-Soviet albums formerly on Melodia. Cool cover featuring the band, with instruments in hand, proudly wearing their traditional telpeks (tall fur hats).
Posted by Zen Archer at 9:37:00 AM