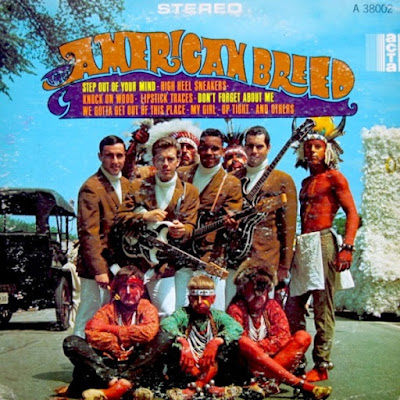 The American Breed was an American interracial rock band, that was formed in 1966 and disbanded in 1969.
The group was formed in Cicero, Illinois as Gary & The Nite Lites. The group's greatest success was the single, "Bend Me, Shape Me," which reached number five on the U.S. Billboard Hot 100 chart in 1968. The song, written by Scott English ((born 10. Jan 1943 in Brooklyn, New York) and Larry Weiss, was a remake of a recording by The Outsiders that had been released the year before. The group also appeared on the 16 December 1967 episode of the television show "American Bandstand," along with Pink Floyd.

The original members of the group were Gary Loizzo on vocals, Charles Colbert, Jr. on bass guitar, Al Ciner on guitar, and Lee Graziano on drums. All members were from the greater Chicago area. As Gary & The Nite Lites, they were somewhat successful in Chicago and put out one single. Soon afterwards, the group underwent several changes. They moved to the Acta record label and renamed themselves The American Breed. Two new members were also added by 1968: Kevin Murphy on keyboards and Andre Fischer on drums.

The band enjoyed its greatest success in 1967 and 1968. They put five singles on the charts, including "Step Out Of Your Mind", "Green Light" and "Bend Me, Shape Me". The group disbanded the following year, and Fischer went on to form Rufus (with Chaka Khan). He later married Natalie Cole. A compilation album, Bend Me, Shape Me: The Best of the American Breed, was released in 1994. "Bend Me, Shape Me" continues to receive occasional airplay on oldies radio stations.

I have both the mono and stereo versions and I feel the mono one packs more punch with its compressed sound and higher bass level. The American Breed, looking a lot like the 1910 Fruit Gum Company on their "Indian Giver" lp, give Native American Indians their due. The music inside has absolutely nothing to do with Native American Indian music. No tribal drumming or chanting, just
blue-eyed soul with wierd cover choices like The Animals, Stevie Wonder, and the worst cover of The Temptations' "My Girl" I have ever heard. However, there are signs of upcoming magic like "Same Old Thing" sounding a lot like the Archies except if Ron Dante was sleepy in the studio.

Email ThisBlogThis!Share to TwitterShare to FacebookShare to Pinterest
Labels: The American Breed, USA