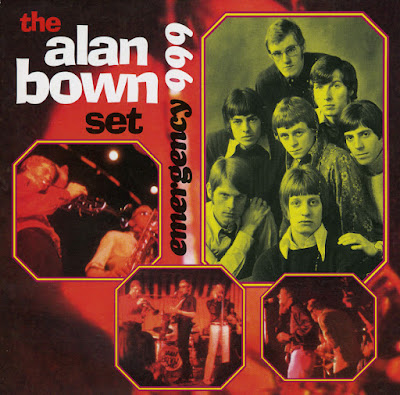 
The history of British rock 'n' roll of the 1960's is filled with the names of homegrown performers who, despite enjoying the favor of critics, music columnists, and club audiences, never managed to make a permanent mark on the record charts.Alan Bown was a case-in-point, a trumpet player who organized a series of bands -- principally known as the Alan Bown Set -- in the 1960's who got good reviews and attracted healthy live audiences, but which were never able to successfully transfer their club sound onto vinyl. Bown didn't start pursuing a professional music career until after having served a hitch in the Royal Air Force -- he organized his first band soon after returning to civilian life in the early 1960's. At the time, there were several different types of music competing for attention in England, including homegrown rock 'n' rollers, teen pop singers, trad-jazz and soft-jazz outfits, and folk groups of various sizes and shapes. Bown's instrument was the trumpet and his main interest were jazz and American rhythm-and-blues, and there was room for outfits of that sort at the time -- his first group made it to the performing Mecca of Hamburg, Germany, playing at venues such as the Star Club and crossing paths with the Beatles, Tony Sheridan et al. He later joined the John Barry Seven during its stint backing Brenda Leeon a tour of Europe, and became a formal member of the studio version of the group, until it broke up in 1964 amid Barry's burgeoning career as a film composer. He formed the Alan Bown Set in 1964, featuring Bown on trumpet, Jeff Bannister on vocals and keyboards, Dave Green on sax, clarinet, and flute, Pete Burgess on guitar, Stan Haldane on bass, and Vic Sweeney on drums. They built up a reputation for exciting live shows and then headed for London, where their resourcefulness at filling their repertory with obscure but worthwhile American r&b and soul numbers quickly got them a loyal following in club patrons and trade reviews. They had rivals in this field, including Zoot Money and his Big Roll Band, Cliff Bennett & The Rebel Rousers, and Georgie Fame & The Blue Flames, and by all accounts Bown and company could hold their own with the best of them. But what each of them did, as early as 1964, that Bown didn't do, was land a recording contract, and Georgie Fame and Cliff Bennett suddenly had chart-soaring singles and international recognition from the songs "Yeh Yeh" and "One Way Love", respectively. In 1965, the Alan Bown Set was discovered by bassist-turned-producerTony Reeves and signed to Pye Records by Reeves' superior, Tony Hatch. They might've made a noise on the charts if their intended single, a cover of Curtis Mayfield's "I'm The One", had gone out as planned -- instead, it ended up as the B-side and the "play" side "Can't Let Her Go" was ignored by the powers-that-were. The group continued to succeed as a club band and by the second half of 1965 had become a top attraction at the Marquee in London; such was their recognition, that they began getting offers to play all across England, and over the next year they did precisely that -- they lost guitarist Green in early 1966, his slot filled by saxman John Helliwell (later part of Supertramp), and they expanded further with the addition of singer Jess Roden, which allowed Bannister to devote his attention to playing keyboards. This version of the group was actually much stronger, a fact perhaps reflected by the three singles that they cut and released in 1966, among them the classic "Emergency 999", which, like their other releases, failed to chart -- but it later found an audience among Northern Soul enthusiasts. Pye finally hit upon the notion of simply recording a live set by the group, which (in tandem with a set by Jimmy James & The Vagabonds on the other side) was released as London Swings -- Live At the Marquee Club. That LP is now considered one of the most important and essential ever released by Pye Records. Guitarist Pete Burgess departed the line-up in November of 1966 and was replaced by Tony Catchpole, and it was this version of the group that played out the end of its contract in 1967. This included one last Pye single, "Gonna Fix You Good (Everytime You're Bad)" b/w "I Really, Really Care", and a song for a French film entitled Jeu De Massacre, featuring Jacques Loussier. The next few months saw the group go through a complete transformation, into a psychedelic band known simply as The Alan Bown, which was signed to the Deram label (after one release on Verve Records) in 1968. With Robert Palmer on vocals, they finally enjoyed a minor hit single with "Still As Stone", and after Palmer left to join Dada and Vinegar Joe, the group carried on with Gordon Neville in their last incarnation circa 1970-71, with Mel Collins on saxophone, by which time they'd moved over to Island Records, no less. The Alan Bown called it quits in 1971, with Bown himself becoming a member of Jonesy before moving into A&R work with British CBS Records, whileJeff Bannister jumped to Jess Roden's group Bronco, and Vic Sweeney worked with Kevin Coyne. Gordon Neville was later a part of Elton John's backing band, as well as working with Rick Wakeman, and Mel Collins went on to work with King Crimson and Alexis Korner, as well as (seemingly) almost everyone else in British music over the next few decades. ~ Bruce Eder, All Music Guide


Review by Richie Unterberger
Alan Bown is most known — certainly in the United States — for his late '60s recordings as leader of a group (actually called the Alan Bown) that played psychedelic pop. The trumpeter had already been recording since 1965, however, with a group called the Alan Bown Set from 1965-1967 in a far more soul-influenced style. This compilation gathers both sides of all five singles the Alan Bown Set released on Pye in the U.K. during that time, along with the seven live songs from the London Swings: Live at the Marquee Club LP they shared with Jimmy James & the Vagabonds, and the French-only single "Jeu De Massacre (The Killing Game)," from the soundtrack of the French film of the same name. The group were in the same general territory as other British combiners of soul, jazz, and blues from the period, such as Georgie Fame and Zoot Money. However, they were more soul-oriented than either Fame or Money (and not nearly as good as Fame), though they too employed a brass section. This collection is fair but workmanlike British blue-eyed soul, with the horns and organ differentiating it from many other British bands of the day. But it's short on really good material, whether group originals or cover interpretations. Jess Roden, who handles most of the vocals, sounds quite a bit like Steve Marriott, though he's not as good or powerful. Those cuts with Jeff Bannister on lead suffer from his thin, uncertain vocals, though one of these, their 1965 debut single "I Can't Let Her Go," was the best tune they did, with its nicely melancholy melody and well-arranged blend of brass, organ, and backup harmonies.

This is a cd of two halves. The various studio tracks are pretty mixed. There is nothing too offensive but you can see why their singles releases never really sold back in the 1960s. Where this album takes off if with the live tracks which originally formed one side of the famous "London Swings" LP, the other being a performance by Jimmy James and the Vagabonds. The atmosphere of 60s London really comes through as the mixture of originals and blistering soul covers captures one of the leading bands of the mod movement in top form. If you already have the live stuff you'll probably buy this on the strength of it and end up a little disappointed. But if you don't have the live stuff, or if you don't want to wear out your copy of the original vinyl, then buy it. Comment Comment | Permalink | Was this review helpful to you?  Yes No (Report this)


I was a regular at The Marquee clunb in Lodon's Wardour Street in the mid-60's and saw The Alan Bown Set there every week ( along with the Who, Jimmy James & The Vagabonds etc. ) I bought the Alan Bown version of 'Headline News' before the original by Edwin Starr - in fact I first heard many soul classics performed by this Band before going on to buy the originals. The Alan Bown Set were leaders on the Mod scene and highly accomplished musicians. This album is a great record of the period and their live cuts from the Marquee really capture the atmosphere of the period when London really did swing! Comment Comment | Permalink | Was this review helpful to you?  Yes No (Report this)

Almost thirty-five years ago I heared a relatively unknown London-based band called the Alan Bown Set perform a song titled "Headline News" on Radio Luxemburg. With it's opening chorus "Extra! Extra! Read all about it," its wonderful horns, and its funky rhythm, it was Mod with "a capital M." The song failed to make the charts, which is still hard to believe. Over the next thirty-five years I never heard the song again. But, I never forgot it either.
Here is that song, and plenty more like it. Before evolving into the mildly psychedelic group called just The Alan Bown, this original incarnation was a terrific dance band; a favorite at the clubs and halls of Swingin' London. Their interpretations of Motown, the Impressions, and other American masters of soul, were among the best mid-60s Britain had to offer. In many ways they were the equals of the Small Faces and the Who, but never achieved the success or the mystique of the other two bands.

This collection of ALL their Pye recordings from 1966-1967 is a wonderful piece of Mod nostalgia. I only regret that they were not as well recorded as some of their contemporaries, and alas for this reissue, their recordings were apparently not remixed. So, this pretty much sounds the way it did back when these tunes first appeared on 45. Also included is a live set, one side of the rare "London Swings: Live At the Marquee" LP (the other side was given over to their contemporaries Jimmy James & the Vagabonds). If you like the Mod sound, you'll definitely find this a treat.

Email ThisBlogThis!Share to TwitterShare to FacebookShare to Pinterest
Labels: The Alan Bown, UK