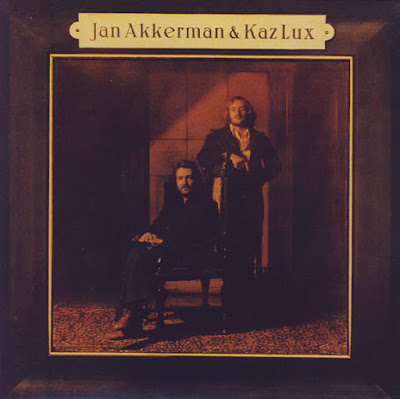 Sort of a concept album here with Akkerman joining up with his old Brainbox buddy vocalist/lyricist Kaz Lux. Lyrically, the album develops around a rather simple man ( Eli) and his old fashioned values while also exploring his fantasies and dreams. Lux`s powerful and emotive vocals convey these sometimes dark themes very effectively, supported by Akkerman`s upbeat guitar which sometimes reaches disco-funk ( yet very textured ) proportions, particularily on Can`t Fake A Good time. We are also treated to instrumental interludes from Akkerman which includes a tribute to Swedish playwright Strindberg and the beautifully layered acoustic piece, Wings of Strings, reminding us of previous compositions such as Love Remembered from the Focus III album as well as Gate To Europe from his self titled solo album. The guest list includes the late Rick van der Linden ( Trace, Ekseption ) who also shares some of the writing credits as well as Pierre van der Linden ( Focus ) as well as featuring members from the top flight line-up from his previous solo album and the addition of a female backing chorus. While not of interest to the traditional prog fan of European bands such as Triumvirat, Eloy or Hoelderlin to mention a few, this album nevertheless sounds very "European" and despite it`s funkiness at times it retains a certain amount of sophistication which is also conveyed through the album sleeve showing a very astute portrait of the two collaborators. If you are able to locate a copy of the original vinyl edition it comes with some interesting art work as well as a lyric sheet. Recommended for Akkerman fans as well as for the adventurous.

One of my all-time favorite albums, ELI has stayed on my regular playlist since I purchased it in the 1970s as a "cut out." My chief regret about this album is its length: it's too short. The atmospheric mood set by the majority of this lush, beautiful music is too soon over. "WIngs of Strings," "Naked Actress" and of course the inimitable though VERY often imitated "Eli" ("I once watched a fly die," "Eli, Please," and "Puh-FACshun" have been nonsequitar epithets of mine since 1979) are mood masterpieces. Great R&B-like female b/vox, great melodramatic half-spoken lyrics' by Kaz, and, of course, the amazing guitar talent of one of the planet's all-time greatest. Even the low points of this LP/CD are interesting, quirky, oft-times humorous, always out there. A wonderful if brief adventure into a kind of psychedelic world. Sit back, relax, and enjoy.
Posted by Unknown at 6:48:00 PM