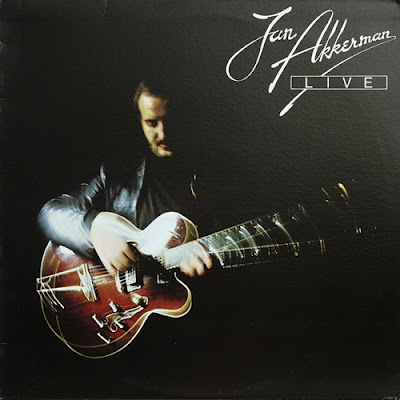 This Jan Akkerman record is a real gem! After firs spin I was convinced this by far his best live album. The material comes mainly from his self-titled record (1977), though Tommy (of the Eruption suite) of Focus is added and two new compositions in the spirit of the self-titled Jan Akkerman album. The recording of this live album is perfect, nothing more can be expected, not even today.

For newcomers. Jan Akkerman is ex-guitarist of Dutch prog band Focus. In his solo career he concentrated on jazz-rock/fusion and some historical lute-guitar playing. Though at first (Profile, Tabernakel) Jan akkerman would use his rockin' electric guitars most of the time, in 1977 Jan decided to become the master of the clean jazz-guitar. This resulted in the 1977 self-titled album with clean guitars, a great band and the best of string arrangements. The compositions had a relaxing but slightly magical vibe and some up-tempo moments. Most of the compositions of this record were played on this live album.

Now, the problem Akkerman and band had to face was the fact that on the album these unbelievable string arrangements made a big contribution to the end result, but they weren't able to get such an arrangement for their tour. The problem was successfully solved by adding an inspired percussionist (I love his contribution) and some synths that both helped to establish a more progressive climate, though the main genre would still be fusion. The two minuted atmospheric synth opening track by Jasper Van 't Hoff really gets me warm for the rest of the album!

A nice track from the Focus era, Tommy, is played with precision but the great vocals of Thijs van Leer are a loss. Still the band makes a great symphonic jazz track with that magical feel and the great guitar solo's (this time clean) of Jan Akkerman.

Conclusion. This recording is perfect, the tracks are great, there's a magical progressive climate on this concert, all instruments are played perfect, some problems concerning the arrangements were solved very intelligent and Jan Akkerman plays plain beautiful. There's only one letdown: the album is short. Running for 35 minutes this doesn't live up to the standards of these days. Still this album is highly recommended to basically every-one who can hear the difference between elevator music and great Fusion.
Posted by Unknown at 7:15:00 PM