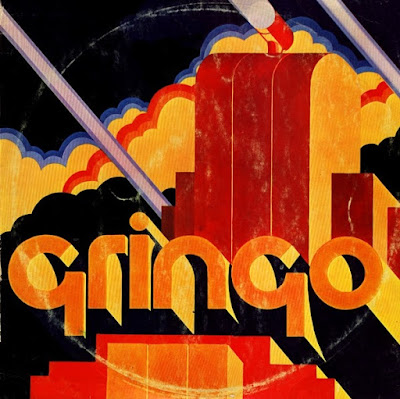 
Like many other short-lived prog-rock bands of the early 70's, Gringo's transmutation from the late 60's pop outfit, The Toast, heralded the birth of a new, exciting musical era whilst, at the same time, casting off for good, the shackles of their pseudo-psychedelic existence.

Formed in 1968 as a three-piece, The Toast embarked upon a busy schedule of gigs culminating in the group recording eight songs for BBC 2's "Colour Me Pop" show which was televised in January 1969.

A year later, aftert having signed to CBS records in August 1969, a single "Flowers Never Bend With The Rainfall", backed by the self-penned "Summer Of Miranda", was issued. The A-side, a Paul Simon cover, was, like the B-side, heavily orchestrated, which sounded, at best, cringe-inducing. "Summer Of Miranda", however, displayed at least traces of their "prog" leanings, which would soon come to the fore.

The single, produced and arranged by Tony Cox, sank without trace but work soon started on recording an album, this time with the addition of a female singer. However, the new vocalist had to return suddenly to the USA, so Cox drafted in another female, this time an Irish born lass called Annette Casey. Annette was originally from Dundalk and arrived in England in 1964 to study. In 1969 she put together a band named Casey & Friends and began to record under Tony Cox Productions. She, together with guitarist / organist Henry Marsh, bassist John G. Perry and drummer Simon Byrne formed the revised line-up.
In the spring of 1970 Toast abandoned the old, tired routine and changed their name to Gringo eager to explore the "new freedoms" offered by the burgeoning progressive movement.

One of Gringo's first assignments was a recording session for Mick Softley where they provided backing vocals on the track "Love Colours" from "Sunrise", his debut album for CBS. Early Gringo gigs saw them paired up with other CBS acts during the summer of 1970 (notably Black Widow, who had achieved near instant success, albeit short-lived).

In March the following year Gringo signed a deal with MCA to record an album and single. The track chosen for the single A-side was the catchy "I'm Another Man" which featured a nifty guitar riff sequence from Marsh and was a natural choice to be lifted from the LP and edited down to a suitable running time for a 45. "Soft Mud", the inspired B-side, is typical Gringo, full of quirky time-changes and tempting twists and turns plus, of course, the melodramatic vocal harmonies that were such an integral part of the group's sound. Both sides of this elusive single are included on this CD as bonus tracks.
Gringo's eponymous LP was released by MCA following a Dutch tour in the summer of 1971. The band's hectic schedule had seen them performing to eager audiences in England and throughout the continent (as illustrated in this booklet by the inclusion of a rare photograph taken during a free concert the group performed in Megeve, whilst on tour with Caravan and Barclay James Harvest).
In November of that year bassist John G. Perry left the group to join Iranquility. Nevertheless, plans were announced for work to start on recording a second LP which was reputedly going to be produced by Jon Hiseman. Meanwhile Casey had got herself married and now went under her new title of Casey Synge.
The band carried on until the summer of 1972 but sadly there was to be no follow-up album to their promising debut from the previous year. Marsh went on to play in SAILOR whilst Casey joined a female outfit called Thunder Thighs who had a hit in 1974 with "Central Park Arrest" and also provided backing vocals for Leigh Stevens, Pilot, Lou Reed, Mott The Hoople, Cockney Rebel, Marsha Hunt and Maggie Bell.

After his stint with Iranquility, John G. Perry went on to join Spreadeagle, Caravan and Aviator. In 1976 Decca released his solo album "Sunset Wading".