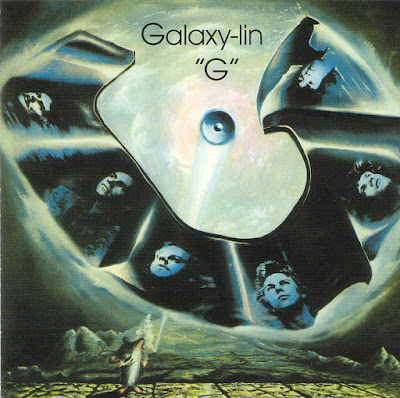 
Mention the name Robbie (Robby) van Leeuwen to most folks and you'll get a blank stare.  That's unfortunate since van Leeuwen is one of Holland's most talented musicians.  In a career stretching back to the mid-1960s he's served as one of the driving forces behind such bands as The Motions, The Shocking Blue (and you thought the ever hot Mariska Veres (RIP) was the brains behind the band), and the far lesser known Galaxy-Lin.

By the mid-1970s, Shocking Blues' never ending recording and touring schedules had left multi-instrumentalist van Leeuwen burned out.  Technically he remained a member of the band, but largely in name only; instead deciding to turn his attention to the outside project Galaxy-Lin.

The band's second and final release for Polydor came in the form of 1975's "G".  While clearly intended as a full band collaboration, the album again spotlighted van Leeuwen who served as producer and was credited with penning virtually all of the material.  So what did this one sound like?   Well, anyone hoping to hear Shocking Blue-styled pop-rock was liable to be disappointed.  Recorded without electric guitars, the collection found the band exploring a bunch of genres including stabs at English folk (their cover of Bert Jansch's 'Hunting Song'), material with a jazz-rock edge that showcased sax/flute player Remelink's contributions (I Know My Baby''), and a couple of more commercial, pop-oriented tracks ('Long Hot Summer'). Side two was given over to a pair of extended instrumental suites ('Bizarre Medley' and 'Ode to the Highways Medley') that were simply too adult contemporary jazzy to sustain much interest.  Unfortunately, at least to my ears little on the set made a lasting impression.
Posted by Unknown at 2:32:00 PM