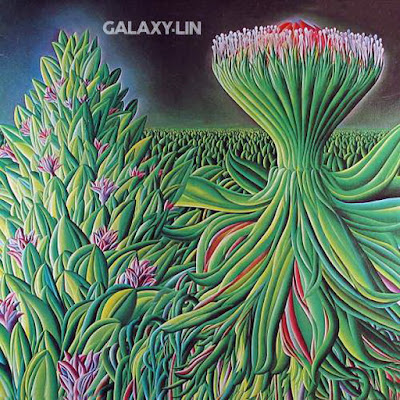 When guitarist Robbie van Leeuwen felt exhausted from the schedule of his main band Shocking Blue, a quite famous NederPop/Psych act of the 60's, he decided practically to exit the band and form this Galaxy-lin project in 1974, bringing along Rudy Bennet on vocals, Hugo van Haastert on mandolin, Peter Wassenaar on bass, Peter Rijnvis on drums and ex-Ekseption Dick Remelink on sax/flute.Robbie van Leeuwen himself handled also the mandolin and produced the band's self-titled debut, which came out on Polydor in 1974.So, two mandolin players in the same band point undoubtfully to a quite original sound and Galaxy-lin were exactly that, a band that could create easy-listening tunes with bucolic extensions due to the dual use of mandolin and the melodic/psychedelic overtones.Robbie was the undisputed leader of the band, but basically this album would pass without notice if it wasn't for Dick Remelink, who's presence adds an intricate touch to the album, a slight jazzy vibe with beautiful sax licks and some interesting solos.Otherwise this work stands out for the decent melodies and clean voices, but the content is far from progressive.A different proposal on Jazz/Folk Rock with its good and bad moments.
Posted by Unknown at 2:28:00 PM