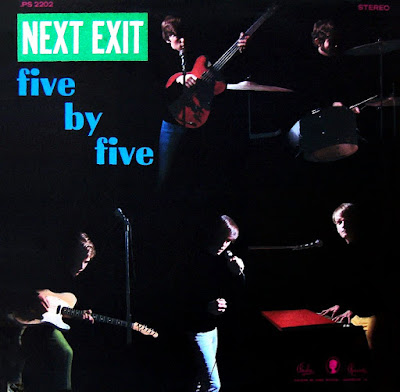 The third single provided the group with a modest top-60 hit which was apparently enough for Paula to rush the group into the studio to record a supporting album.  Produced by Gene Kent, 1968's "Next Exit" offered up a mix of the earlier singles and new studio material.  Apparently not too comfortable with the band's creative talent, the focus was on better known material; in this case a mix of popular and lesser known hits.  Green's wonderful 'Too Much Tomorrow' was the one exception and also provided the stand out track making you wonder how good the album would have been if they'd been given a little more creative freedom.  Clearly determined to maximize commercial potential, the set covered virtually every musical niche imaginable including competent stabs at blue-eyed soul ('Soul Man'), conventional top-40 pop, and frat rock (their earlier 'Shake a Tail Feather' rave-up).  Best of all were the band's stabs at psych oriented material.  Their  raw cover of Joe South's 'Hush' easily put Deep Purple's better known cover to shame.  Similarly 'Nothing You Do', their wild take on Arthur Lee and Love's '7 and 7 Is' (be sure to check out the re-channeled stereo with a good pair of headphones), and the sitar propelled cover of The Sir Douglas Quintet's 'She Digs My Love' were all worth hearing.  Paula also pulled another single from the album: 'Ain't Gonna Be Your Fool No More' b/w 'She Digs My Love' (Paula catalog number 311).

Over the next two years the band recorded a string of 4 additional singles, though none sold well:

Email ThisBlogThis!Share to TwitterShare to FacebookShare to Pinterest
Labels: Five By Five, USA