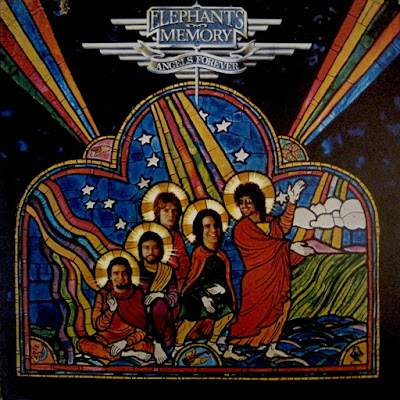 
Originating from New York, Elephant Memory was formed in 1967 by Bronstein and Frank, who were both playing the strip joint circuit. They soon became known for their outrageous performances, with light shows, destruction of sculptures and weird outfits. After recruiting a young Israeli singer, Michal Shapiro they were signed to the Wes Farrell Organization, a powerful management and production company. Their first album was released in February 1969 and has a flashing sleeve, the group members being pictured nude, covered with paints, in front of an elephant. An interesting record, mixing psych, dreamy ballads, jazz and hard rock, two of the songs, Old Man Willow and Jungle Gym At The Zoo appeared on the soundtrack to 'Midnight Cowboy'.
With the success of this film, Buddah released Songs From Midnight Cowboy, which was basically a reissue of the first album with new versions of Everybody's Talkin' and Theme From Midnight Cowboy.
Michal Shapiro, Richard Sussman and Chester Ayers then left with Richard Sussman joining Grootna. A new line-up was put together and the next album, produced by Ted Cooper, Take It To The Streets was totally different to their debut. Elephant's Memory were now playing a very effective hard-rock, obviously inspired by the Detroit groups of the era. Tracks like Power, Piece Now, Damn and Mongoose are powerful and Mongoose became a hit. Incidentally Rick Frank is credited as "Reek Havoc" on the sleeve.
Following this album, the line-up changed again and the band backed John Lennon and Yoko Ono on Some Time In New York City and Approximately Infinite Universe. Their fourth album was naturally issued on Apple and has a good reputation.
In 1973, they backed Chuck Berry on his Bio album and finally released a final record in 1974, produced at the Rockfield Studios in Wales by Steve Smith.
Stan Bronstein launched a jazz-rock career, Rick Frank formed various local bands but died in the nineties. Adam Ippolito went on to play with soul and funk groups and Wayne Tex Gabriel joined Mitch Ryder. Adrian Peritore (aka Guy Peritore) later formed Beede Oms with David Cohen and went on to play with The Motels amongst others.
Posted by Unknown at 10:55:00 AM