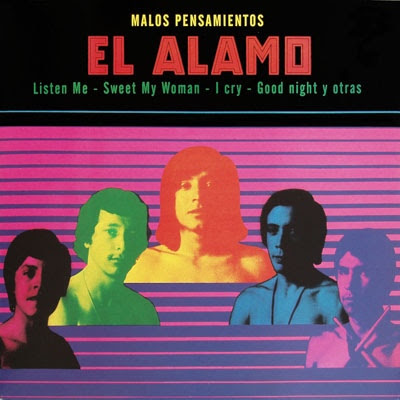 
Ultra rare vintage latin psych- rock record from Peru. This record released in 1971 and up to now is one of the essential rock recordings coming from Peru and maybe even from whole South America. El Alamo play genuine psych rock with nice fuzz guitars. Vocals are mostly in English. The original vinyl is rather expensive and very sought after. Very beautiful artwork!
Peruvian purveyors of naive but charming acid psych, my post of El Alamo comes with the following caveat: there's a definite Santana edge to some of the cuts here. If thats sufficient to send you scurrying for cover so be it, though you'd be missing out on an otherwise choice slab of psychedelic exotica. A first glance might suggest the that dominant influence at play here is Crosby, Stills and Nash, given that the first track here ("Candy") is the Doo-doo-doo-doo-doo DOO DOO doo doo doo doo" bit from Suite: Judy Blue Eyes, but thereafter, things take a liquidly acidic turn with the very Traffic Sound-like psychotropic swoon of "Can You See Me". From there on out it's a mixed bag of the beautifully tripped and the slight and disposable, the former fortunately outweighing the latter, particularly on the completely fried title track, a pinnacle of South American psych and reason alone for an immediate download of this gem.

The group was formed in Magdalena, rehearsing all along the year of 1970. Consisted of Luis Iturry on vocals and rhythm guitar, Tino Pow Sang solo guitar, Ricardo Allison on drums and Arturo Montenegro on bass, their first tests were conducted at Luis Iturri’s family home in Magdalena. In the beginning they did progressive rock, expanding through psychedelic rock, hippie latin style such as Jefferson Airplane and Santana. In April 1971, officially calling El Alamo they played with PAX and other bands in different parts of Lince, Magdalena, Pueblo Libre and Jesús Maria.

In December 1971 they recorded their debut LP entitled Malos Pensamientos, the whole recording took it place in just one day! That very day also had the support of Peruvian musician Aníbal López in congas and timbales. The art photo on the cover was made by Estanislao Ruiz, director of the legendary Rock magazine. Many of their songs had a lot of publicity in radios like Radio Miraflores, though the military dictatorship used to ban summarily (sic) all rock groups from that era. (!)

Thus, the band had to present yourself only in small venues such as El Embassy or La Fontana; right after a solo 45 RPM the band broke up in 1972, with all its members except for ‘El Chino’ Pow Sang, retired from music, leaving a harmoniously latin psychedelic print, being one of the many forgotten gems of Inca Rock scene.
Posted by Unknown at 9:29:00 PM