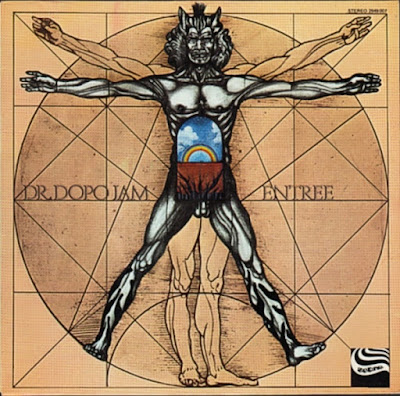 
This Danish band originated in Roskilde towards the ending of 1968 playing and utilizing a somewhat bizarre and sarcastic approach to both music making as well as stage antics. Kristian POMMER was the instigator of the group while at the same time handling keys, vocals and the guitar. Circling around crazy thematics and a wonderful sense of theatrics, POMMER handed over to Denmark what ZAPPA did to the English speaking world: fun music revolving around blues rock, jazz and psychedelia. Denmark was a hotbed for both psychedelic music as well as jazz, yet it was down to a couple of groups such as BURNIN RED IVANHOE and SECRET OYSTER all of which were headed by saxophonist extraordinaire Karsten VOGEL ? and dear ol DR. DOPO JAM. Nobody would take the sporadic shifts, avant guarde tendencies and cut up experimentations as far as this band though.

Helping out in the original cast were Poul ?Skak? SNITKER on flute and trumpet, Lars RASMUSSEN on electric guitar, Sten UGLEBJERG on percussion and something as wonderfully zany as a washtub and last but not least Sten OLSEN wielding an earthy and infinitely bouncy bass.

In September 1969 the band went through some changes as UGLEBJERG was replaced with not one but two drummers in Niels ?Vejmand? CHRISTENSEN and Bent CLAUSEN. Olsen?s spot was handed over to a guy named Jesper HINDØ who was just as versatile as his predecessor. This edition of the band continued to experiment and build on the overt zany and eclectic sound ? only to yet again in 1972 rearrange the line up, now with the add on of trombone and saxophone. Kristian POMMER additionally handed over the vocal bits to singer Lars BISGÅRD.

Second outing Fat Dogs and Danishmen changed the overall expression of the band with a clearer and more orchestrated expression while at the same time holding onto the unique fire and quirky charm of the debut. On the sophomore though, they were infusing congas and a violin trio as well as the highly talented Wandy TWOREK as soloist.

"Eclectic" best describes this album - a real discovery for me. The combination of instruments is excellent: basic rock instruments plus flute, horns, vibraphone, congas, etc. Heavier jams suddenly transition into lighter and breezier syncopated guitar and conga effortlessly. So many styles are represented here yet they all seem to flow together so well. I really like the way they use the vibraphone and syncopated rhythms to support everything. There are strong hints of Canterbury and Zappa in their humorous approach to what they do.
Posted by Unknown at 10:09:00 AM