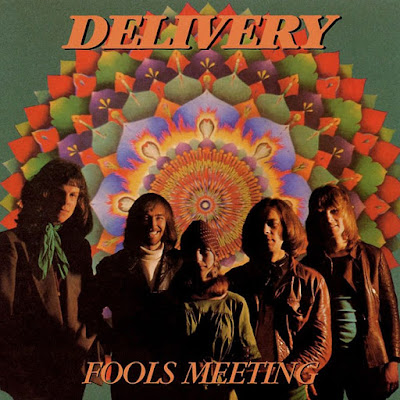 Promising blues-jazz collision.
As was often the case for progressive albums released on the cusp of 1970, Delivery's one and only LP Fool's Meeting sounds torn between prog innovations and the blues and psychedelic obsession of the late 1960's. In the case of this Canterbury Scene proto-supergroup (most of the members would go on to great success with the likes of Caravan, Gong and Soft Machine, among others) it's the fetishized American blues rock that keeps them grounded in the past. Although they do it well, it ultimately holds Fool's Meeting from being as distinguished and memorable as some of the records these musicians would work in later incarnations of their careers.

When it comes to this late Sixties' British response to longstanding American blues tradition, I'm most inclined to point the finger at the first two records from Led Zeppelin's career; there was no doubting where most of Zeppelin's  influence was coming from, but they added a new kick that made it interesting. Delivery does much the same on Fool's Meeting, with the notable exception that while Led Zeppelin amped up blues with the fuzz of hard rock and proto-metal, Delivery has imbued the style with the nuance and interplay of jazz music. It's an incredibly promising combination, and when Delivery successfully manage to pair the two, the result is significant. "Miserable Man" in particular is a fantastic example wherein Delivery nail the atmosphere of both styles. Disappointingly, as the album progresses, the jazz aspect becomes less prominent, leaving the dated blues rock to preside, complete with predictable 12 Bar songwriting patterns. Delivery's jazz rock still finds its way through the cracks in the form of the occasional saxophone solo (as is the case in "Fighting it Out", but the excellent promise of Delivery's style doesn't feel realized here. Very fortunately for after-the-fact listeners however, the scaled fusion of jazz with psych and rhythmic rock would found the basis of the Canterbury Scene.

While the musicianship on the album is appropriately strong, the most memorable element of Delivery's music is undoubtedly the smoky voice of Carol Grimes. Although she's the only member that wouldn't have a lasting impact on the Canterbury Scene past Delivery, her vocals are excellent, wrapped up in a confident vibrato and charismatic presence that might warrant comparison to Robert Plant's bluesy howling on the early Zeppelin albums. More common comparisons to Jefferson Airplane's Grace Slick are not beyond reason, but Carol Grimes takes a fiercer approach to her vocals. She would go on to play with a host of blues and jazz acts as the years went on, and while her post-Delivery albums might be worth checking out for her voice alone, it's something of a disappointment that we didn't get to hear her voice in any more progressive rock. With a voice like hers, I'm surprised she didn't become more of a legend. There's a gaggle of female vocalists in the 'occult retro rock' scene today that are trying to sound exactly like her, most probably without ever knowing it. Of course, none have ever truly succeeded.

To my chagrin, the Canterbury Scene has generally alluded my progressive rock listening experience. For what it's worth, Fool's Meeting is more than enough to pique my interest in the style, with the full knowledge that the album has only scratched the surface. Carol Grimes and Delivery have earned their respective spots as quiet legends in the British rock pantheon. Especially if you're a fan of Caravan, Gong, Hatfield and the North, National Health, Soft Machine or any of the other bands these guys would play future roles in, Delivery should stand as an excellent history lesson.

First of all one must add that the sole Delivery album, Fool's Meeting was released by Cuneiform Records together with several bonus tracks. However one must also state that unfortunately much of what this band had recorded, has unfortunately been lost. Master tapes of this album have been lost as have also been the recordings of the band live at various concerts such ss the BBC Top Gear Sessions. Notwithstanding all this the label have managed to include two "bonus" tracks from the same recording session of the album, including the single release Harry Lucky that was unavailable on the vinyl edition, together with two live tracks and the track One For You from the Lol Coxhill/Steve Miller album sessions.

The album opens with the track Blind To Your Light, which with its running bass line conjures up a definite bluesy atmosphere thus confirming the record label's aspirations for Grimes' contention as a vocal ist to rival Janis Joplin and Grace Slick. However the saxophone playing of Coxhill together with Steve Miller's piano helps add spice to the atmosphere giving it a jazz touch alongside the likes of bands such as Colosseum. The live version of this track is played in an incredibly much slower pace with the guitar coming to the fore of the band's playing, something that was not too conspicuous on the studio version. The absence of Lol Coxhill on saxophone is probably the most plausible reason for this and it is up to bass and guitar to fill in his shoes. The slow bluesy touch is maintained on Miserable Man, though the pace is slowed down considerably (in comparison to the studio version of Blind To Your Light) and the overall sound of the track has its roots in the sixties psychedelic rock scene, with Jefferson Airplane a strong contender for inspiration.

On Home Made Ruin one can start to fell the progressive rock slowly creeping into the band's music. The first track that had Phil Miller as sole composer, the music sees the guitar coming to the fore to reply to the jazzy keyboard solo, though the striking factor of this track is the strong ever increasing rhythm and power with which it is played out. The alternate take of this track features a completely different overall structure with some delightful interplay between piano and guitar. With Is It Really The Same, the band start to take on the sounds that were pervading the British rock scene, namely via bands like King Crimson. Coxhill manages to infuse a raw energy into the band's performance giving them a much more raw rock sound, rather than the polished feel that many progressive and Canterbury bands would tend to follow. The live version has Phil Miller's distorted guitar carrying the load of the saxophone, though one must admit that there is a lack of broadness and harshness when the track is executed live.

Once again it takes a Phil Miller composition to bring out a more obvious progressive feel to the music of Delivery. We Were Satisfied is just one such track with a mixture of prog and psychedelia while tracks like The Wrong Time and Figuring It out sound more like a jazzed up version of The Grateful Dead with elements of R&B surfacing occasionally. The last track that was originally on the vinyl album was the title track, Fool's Meeting, which is a true bluesy number that once again re-evokes the Grace Slick/Janis Joplin comparisons with Carol Grimes' powerful vocals.

Harry Lucky was originally omitted from the vinyl version, but was released as a single to promote the release of the album. Of the tracks on the album it is probably the weakest of the lot featuring little of note, unlike the final track on this album, One For You. Written after the official demise of the band it was recorded during the Coxhill/Miller recording sessions in Autumn, 1971 ad could be considered to be more of a jam session than anything else. However it shows how the involved musicians had matured over the short period since their last official recording. The music had evolved from a broad blues style to a more improvisational jazzy approach, a sure feature of most Canterbury bands.

It is indeed a pity that both the album and the band have become mere footnotes in the history of Canterbury music. The album should prove of interest to all those who want to see (or hear!) how much of the British progressive rock scene evolved from the British blues sixties boom. This album is an important stepping stone for such bands standing somewhere in the middle of both genres.
by Nigel Camilleri