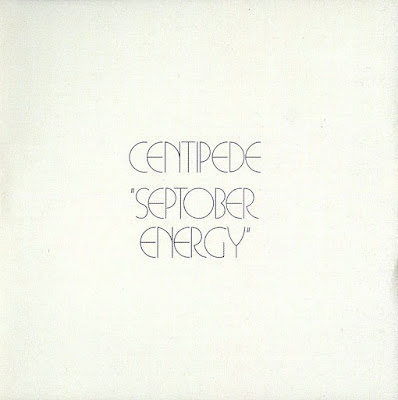 
Tempted by the massive and incredibly talented line up on this record, you buy it and take it home with you. When you drop the needle, you immediately scratching your head, waiting patiently for the massive introductory non-musical chaos to fall into some kind of semblance of rhythm or ‘song like’ material, but it doesn’t. Instead, it shifts up a gear and what you thought was chaos before was actually the calm before the storm. A storm that, if you persist, leads you through a four part journey of what you could describe as a ‘sonic safari’ which explores all manner of musical and non-musical meanderings.

Centipede is the concept created by Free Jazz pianist Keith Tippett who managed to assemble a 50 artist strong line up of the most creative musicians in Britain of the time, into a studio over 3 days to record an album. As if that wasn’t enough of a statement, recruiting Progressive Rock luminary Robert Fripp to produce the record was the icing on the cake.

‘Septober Energy’ is a labelled as a ‘Progressive Jazz/Rock, Big Band’ experiment that explores Free Jazz, Ambient and snippets of all other styles of Jazz and Rock over four 20 min suites (2LPs’). Mostly instrumental material but with occasional lyrical and choral vocal appearances from Maggie Nicols, Julie Driscoll, Mike Patto, Zoot Money and Boz Burrell, which add  some welcomed framework to the ‘free-ness’ of the tracks. I never realised just how soothing a human voice is when you’re immersed in Free music like this. Like a place of shelter.

Although I can see how ‘Septober Energy’ was not well received by fans of Prog (or Jazz for that mater),  i don’t think an album like this one was created to seek approval or success (commercially or otherwise) from any outside sources. Some might find that a little too self indulgent. But i guess when you have a 50 piece band, any self indulgent playing still has an audience big enough to justify it as there would have been 49 other artists cheering you on in the studio. Who needs the outside world when you have that??  Its a musical celebration, probably created for the sake of just getting together with a cast of creative people and exploring music in a really free and boundless way. And why the hell not?

Some of it is breathtaking and glorious. Saxophone solos that are magical, Slow building progressions which lead us unknowingly into a massive sea of sounds that are both frightening and enlightening all at once. Some of it is an absolute mess with total nonsensical passages of muted horn blowing and percussive crackling that makes one ‘zone out’ and switch off for a minute or two. Its not a masterpiece but it is masterful in its juxtaposing waves of delicacy and brutal forcefulness.

I struggle to find the words to do this record justice. But i do love it! For its courage and innovation. For its total abandonment of commercial viability. For its degree of difficulty through working with so many artists. For its uniqueness as a project and for the wonderful, structure-less and challenging music presented here. ‘Septober Energy’ is fantastic in the same way Trout Mask Replica or Uncle Meat are brilliant and essential additions to the Experimental Jazz/Rock annals.

I can sum up the spirit of the album by quoting from Keith Tippetts later record 66 Shades of Lipstick’:… “May music never become just another way of making money”.
Posted by Unknown at 5:34:00 PM