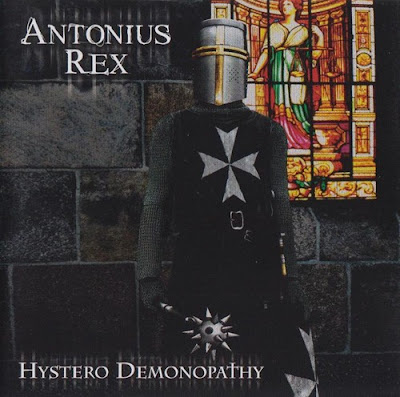 
A triumph of modern dark Italian progressive music, `Hystero Demonopathy' sees the return of the charismatic Antonio Bartoccetti, along with his son Rexanthony, medium Monika Tasnad, and even old Jacula/Rex cohort Doris Norton (credited, although I've yet to figure out what role she played in the creation of this work). Although the previous comeback releases `Switch On Dark' and `Per Viam' were effective albums, they positively sound like a practice run in the lead up to this one. This ambitious concept piece detailing a woman tormented and possessed by demons is simply the most grandly and proudly symphonic, varied, sophisticated musical statement of their modern works, and perhaps one of the defining Bartoccetti works to date.
One thing that stands out immediately is how much Antonio's son Rexanthony has truly stepped up for this release. His keyboards are all over this one, orchestral and epic one second, subtle and restrained the next, constantly bridging the vintage gloom of the 70's releases with modern sensibility and techniques. It's like the father has handed control to the son, trusting his instincts, supporting his decisions and complimenting him when nescessary. I like that - the wicked young apprentice! But Bartoccetti himself is not fading away, in fact he's in peak form, his guitar playing filled with so much renewed and fiery purpose, and he hasn't sounded this good in years.

It's not so much that the album does much drastically different than previous Rex/Jacula albums, it just makes those elements grander, more sweeping and truly cinematic. `Hystero Demonpathy' almost plays out like a horror movie soundtrack, littered with fragments of dialogue and ambient effects. The punchy opening title track is all stomping pomp, full of electronic tension, orchestrated synthesizer majesty and a haunting gothic choir, completely addictive and grabs your attention right from the start. Rexanthony displays great subtlety with the delicate piano and sweeping synth melody of `Suicide Goth', truly heartbreaking and memorable, and one of the most beautiful moments on a Rex album to date. Antonio delivers some appropriately murky bass that slithers around the background here as well. Although starting as a beautiful duet of classical guitar and organ, out of nowhere `Are Mine' blasts the listener with some supremely feral punishing doom- metal noise and some wailing inspired guitar shredding from Bartoccetti.

`Disincantation' is a return to the trademark Bartoccetti recitation, with some lovely orchestral synth and tip-toeing piano that even gently resembles `Initiatio' from the first Jacula album way back in 1969, along with some nimble and stirring acoustic guitar soloing from the Master himself. `Demonic Hysteria' is like a cold, creeping industrial sledgehammer with some dirty electric soloing, wailing vocal desperation, and the battle-cries of a filthy devlish army advancing ever closer. `The Devil's Nightmare' turns to uptempo gothic dance, Rexanthony utlizing his skills from years of performing in the techno genre to good use with pumping beats and dizzying synth soloing.

Pretty sure there's some kind of eerie Mellotron emulation all throughout `Witches', a clever ambient piece that mixes vocal fragments (the memorable `Liars, witches, sodomites and thieves' is used to great effect!), sighing, howling winds and a looping sample of breaking glass into hypnotic percussion patterns. After more raspy narration from Bartoccetti, `The Fatal Letter' spins into a surprising and uplififting remake of Ralefun's `Agonia per un Amore' with soaring synth, pulsing bass and Enigma-like programmed beats.

This is a brief pleasant respite before the absolutely repulsive and foul closer `Possaction', with some seriously unnerving vile torturous female screams, a ranting preacher, chanting mobs and develish monsters over military drumming and imposing church organ. This piece is one of the truly dangerous and deranged pieces ever by the band, full of stark terror and total bleak hopelessness. It takes the album and band to another level altogether, please approach it with severe caution. It will leave you completely altered, and you will never forget it.

With both the vinyl and CD editions adorned in beautiful gothic and esoteric imagery, the Bartoccetti clan should be immensely proud of the grand dark work they've achieved here. It's a superb addition to the Antonius Rex legacy, and another masterwork from the Dark Lord of the Italian progressive genre.