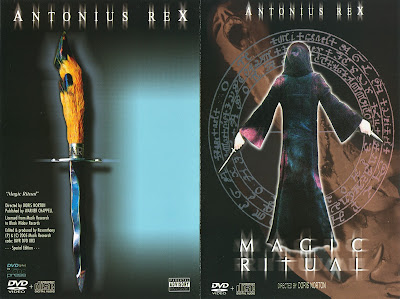 For the brave, hard core fans
"Magic Ritual" is an audio and video release that marked the official recording return of the legendary Antonius Rex, after a 14 year self-imposed hiatus where Antonio and Doris concentrated on other projects. No doubt they were busy raising their son RexAnthony, and planning Doris' many solo projects and work with computer companies. "Magic Ritual" is significant for many reasons. Being their first major band effort since 1980s "Praeturnatural," which was a farewell to their many appreciative fans, M.R. was not just a music release. It was also a full 26-minute conceptual video directed by Doris Norton, written by Antonius Rex, and assisted in technical production by RexAnthony-making this a true family affair. It was originally released as a CD/DVD dual-disk and then followed a year later by a special edition LP of the soundtrack (both from the marvelous Black Widow Records, who specialize is Italy's darkest progressive rock-check them out.)

Magic Ritual features highly provocative and extremely dark imagery set to their trademark heavy rock sound-this is not a video to be in any household with small children or overly paranoid Christian fundamentalists, trust me on that. (People often talk about the lyrics of Comus being outrageous, well, similar darkness is afoot here but you see it with your eyes rather than just hearing words!) The short film/conceptual video features several chaptered treatments with different takes on dark ritual, human sacrifice, and sorcery. I'm no expert on the occult so I really have little idea of what this all means and not much interest in the content-it is the music that attracts me to Jacula/Rex, not an interest in the occult. But you will see men being seduced by gorgeous witches only to be strangled by them, you will see strange rituals and horrific nightmares. You will see dark lords baptizing young maidens in evil, handing them 9" curved daggers, and sending them on their merry way as their fate awaits them. As possibly the darkest Rex release to date you should expect plenty of blood and death along with your fearful thrills. These fantasy scenes are on the whole quite well done and only occasionally cheesy. (Certainly of equal or better quality than the Song Remains the Same fantasy sequences which no doubt boasted a budget 100s of times more than this.) Many scenes are believable enough to creep you out or thrill you, whichever you're more apt to feel. Sometimes a bird will leap at you with a loud noise and these few instances of cheese feel contrived, but they are the exception-most of this is diabolical as hell. The most interesting part to me as a music fan was the rare chance to see video clips of Antonio, Doris, and even Charles Tiring shot in the 70s at what appears to be a live show and various other locations. These clips are interspersed with the fantasy footage in very fast edits which is still a treat, though I would have much preferred a separate documentary for the non-fiction footage. The soundtrack music for Magic Ritual is much more energetic and rocking than Praeturnatural was on the whole, combining the tribal-beat ritualistic qualities of the Rex debut with the more modern hard rock. The music charges along pumping volume and drama to underscore the horrific images awaiting you, fueled by Antonio's wailing electric guitar riffing and occasionally tempered by Doris and RexAnthony on keyboards.

Magic Ritual would be quite a shocking place to begin your Jacula/Antonius Rex exploration and I don't recommend you start here. But for those who enjoy dark themes and the mystical Antonius Rex sound this is a recommended and enticing item to crawl under the covers and peek at! What a rarity to see a visual interpretation of such wild Rex horrors.
Posted by Unknown at 5:58:00 PM