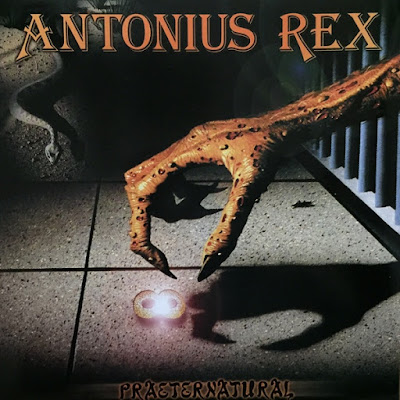 
A beginning and end in one album
Antonius Rex seemed to have two different stylistic and motivational periods to their career. The first period which began upon Jacula's dissolution and went through the Ralefun album, was distinguished by an experimental Jacula-style approach on their first album before heading down a road of less sure-footed compositions and waning personal interest in their "job" as musicians. Their second phase oddly enough began in 1980 with Praeternatural, which ironically was the final album before a self-imposed exile of over two decades between the Rex legend and the principles Antonio Bartoccetti and Doris Norton. It is strange because this album, right on the heels of the messy Ralefun and right before they walked away from the band, is actually the compositional/stylistic foundation of the comeback Rex of 20-plus years later. This album doesn't sound like the '70s Rex at all-it sounds like the Rex of Magic Ritual and Switch on Dark, the Antonius Rex vision of the 21rst century. It is here where they found their true direction of slick, erotic darkness, modern textures, and horror-prog nightmares as opposed to the traditionally symphonic yet experimental proto-goth of Jacula. They would not marry this new sound to the near-perfect conclusion of "Switch on Dark" quite yet but this sound in its infancy is quite exciting in places. For a band too often and incorrectly described as "soundtrack music" this album (along with Magic Ritual) is the one that gets closest to that form. Even while walking away from the band for over 20 years it is here where Rex found the passion again..they sound excited here. The songs pulse with life..yet a cold and slowly waking life..not quite complete but with great splendor. One short blurb used to describe this album on a retail vendor site was actually pretty receptive: "this reminds of a cross between Devil Doll's most subtle moments, the darkest Tangerine Dream stuff and the more musical artists on the Cold Meat Industry label."

Dropping all other contributors the Rex were now down to their two core members Bartoccetti and Norton, and Praeternatural was described as a sort of last gift to their small but dedicated fan base. It features a much more modern sound than their previous work which often relied on the gothic church organ, flute, and what seemed to me a more realistic occult feel (keep in mind though I can't understand Italian.) Praeternatural features Doris in a more updated sound employing the synthesizer and playing drums, while Antonio handles vocals, bass, and all guitars. Most of the album consists of atmospheric keyboard backgrounds with often repetitive rhythms. Doris is not an outstanding drummer by any means but she is competent for the purposed here. Atop these backdrops Doris solos on various keyboards as will Antonio on electric guitar and these periodic solos are really fantastic. Doris' work here is a prelude to her coming career in the 80s as a solo artist and electronics expert (she was sponsored by Apple and IBM in creating experimental electronic music), while Antonio's lead play here is nothing less than stunning-he proves here his playing can drop your jaw. The long tracks allow everything to unfold slowly and while the ambiances are nice. The vocals here are only periodic and mostly spoken or whispered by Bartoccetti in typical sinister fashion. The longer tracks feature chugging metal chord structures that can get repetitive with the tribal drums and droning keys as they provide the backdrop for some wicked instrumental excursions by Antonio and Doris. The title track is pure doomscape alternated with icy techno-metal that climaxes with Doris' fantastic solo where she puts to rest anyone who still longs for Charles Tiring. Her playing is passionate and adventurous. "Capturing Universe" offers some acoustic passages and nice escalating choir voices throughout as the tension builds heavier and heavier. Antonio hits the solo out of the park. The closing track "Invisible Force" is pure drama with sound effects of children's voices and slamming doors to spooky piano. Praeternatural is really a strange animal, unique in their catalog for its bizarre sound, fresh in that it is the first of its style for Rex. And yet the composition is not quite as convincing to me as their comeback material would be. Honestly I actually prefer the previous Ralefun despite its own considerable flaws. Rex's first act was now complete and they were now moving into a long hiatus.
Posted by Unknown at 5:46:00 PM