Antares
1981
Over The Hills 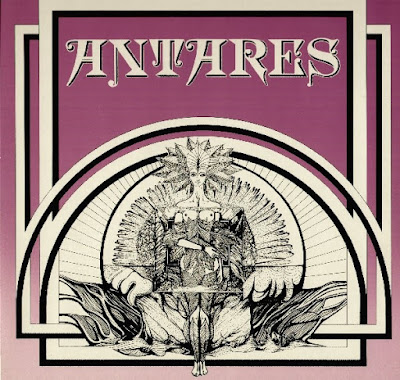 Formed in 1978 by multi-instrumentalist Claus Neide, the original Antares German trio started with Bernd Menssen on guitar/synths/vocals and Axel Cornelius on drums/vocals.The next year Menssen quits and Ludwig Eilers and Helmut Stamm jump in on guitar/synths and bass respectively.Stamm soon departed to be replaced by Jimmy Schimmelpfennig.In 1981 the band was again shortened to a trio with Neide, Eilers and new drummer Helge Bulow, formerly with the Neo/Symphonic Rock band Tau.It was time for the band's first full-length album and the LP ''Over the hills'' was released in 1982, distributed by Bellaphon Records.

Neide claims to have been influenced by GENESIS, YES and SAGA and the truth is that these influences somewhat sum up Antares' style.For the most of its part ''Over the hills'' is great Neo/Symphonic Rock with dramatic atmospheres and demanding musicianship, though the heavy synthesizer sounds and the mediocre production may disturb the Classic Prog fan's ear.But noone can deny that the album is filled with some very good arrangements, performed by a trio with talent and interesting ideas, where the melodic but also dynamic guitar work of Eiders meets the grandiose keyboard passages of Neide, no unlike the rich sound delivered by ANYONE'S DAUGHTER around the time.Additionally the trio offers plenty of complex interplays and dramatic solos along with some nervous vocals, often with a theatrical edge, to make the sound deeply underground and obscure.The sharp synthesizers, distorted vocals and strong bass remind also of British progsters QUASAR.And there is a heavy amount of GENESIS' inspired symphonic lines to make this album far from commercial and deeply emotional.

Of course with such a style the band had no chances to survive.Antares kept playing live for a number of years but split for the first time in mid-80's after the departure of Bulow.Their debut though is a classic among the very raw and underground releases of Neo/Symphonic Rock from early-80's and comes highly recommended, especially to all those adoring a rough but also delicate prog experience.
Posted by Unknown at 4:30:00 AM