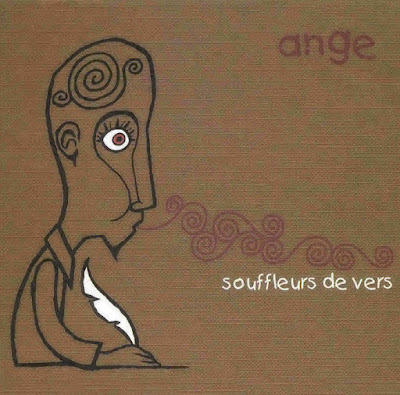 
Two Christmas presents for the Ange fans living in Lyon. A gorgeous concert during which were played many songs from the new album and oldies (but goldies) too, true nuggets found in the rich Ange discography (by the way, the old songs were played with the original arrangements and today's brio). And a new album. I was surprised during the concert (I didn't know the new album yet at that time) by the quality of these new catchy tracks opening the set (and the album): 'Tous les boomerangs du monde' or 'Coupée en Deux' sung by Caroline. In the great Ange tradition, I enjoyed Tristan's splendid vocals once more in this new song 'Nouvelles du Ciel' closed as far emotion and quality are concerned to his version of Polnareff's 'Le Bal des Laze'. What about the rest of the album? Same excellence? Yes, indeed! First of all, some words about the cover and booklet. Gorgeous and clear, coloured and Zen. And the title, a superb pun, is an invitation to poetry, to true literature. As a good Bordeaux wine, Christian Décamps and all his band are still going strong. Ange shows they have a true musical magic, they are a real machine creating emotion. Almost all songs remain in your memory from the very first listening. 'Les Ecluses' with its multiple melodies is splendid, 'Où vont les escargots' with its delicate arrangements, sound and production (Caroline at her best) too. For Caroline is in her full bloom, more at ease in emotion. The track giving the title to the album is the only truly progressive epic, therefore with a more difficult access, one of longest tracks by Ange (16'), where the band shows again his capacity in composing such suites. Yes, Ange is a prog combo! A very good one even if as a whole this album features rather direct and traditionally formatted songs. Ange has always been a subtle blend of reality with fantasy, a bitter glance upon life and stories from dreams and imagination. In this album, it seems that reality is more present ('Dieu est un escroc'), so this is a darker album, a bit sadder than usual. Thus its emotional richness see what happens to the world and life, but finally all that remains enjoyable" seems to say the author. All Ange albums are good or even very good, that one is gorgeous. If Ange had not produced masterpieces in the past, the roots as they say, this album would be their best since there are no weak moments as the previous works featured. Yes, their best! (Olivier Sauce and Thierry - first published in Acid Dragon #46)
Posted by Unknown at 4:13:00 AM