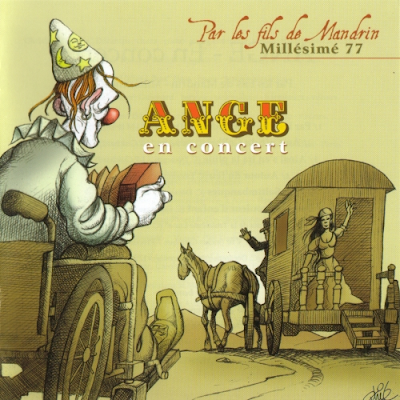 
This is a concert registration from 1977 documenting Ange's then latest release Par Les Fils De Mandrin. I've never been too fond of that album but this live document at least solved some of the issues I had with the studio version.
First of all, this live album has all the edge you would expect from an Ange recording. The sound might not be as thick and polished as in the studio, but to me that's an advantage. It rocks more and it sounds less aged. Another improvement is that some of the tracks are extended a bit, as such the musicians get more room to shine and the songs improve from the surplus of musical substance.
Most of the track extensions come from pieces of poetry that Dechamps recites in between the songs. They're not of much added value for me as my French these days is reduced to a minimal 'ordering food and drinks' vocabulary. But they sure don't sit in the way of the album flow.
The addition of Le Vieux De La Montagne as an encore is the true highlight here. For Ange fans that track alone makes it worth getting the album for. It was otherwise only available as a 4 minute something track on Mémo. In its 11 minute version here it's a treat, just like that other non-album track Le Chien, La Poubelle et la Rose that was released on the 1977 live album Tome VI.
This is a great live document, and a preferred choice over the Par Les Fils De Mandrin studio album.
Posted by Unknown at 3:51:00 AM