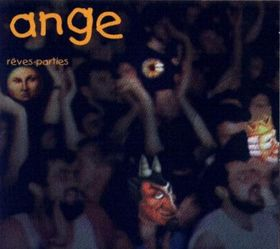 Rêves-Parties is by far the least interesting live album from Ange. I have had a difficult ime to go through the whole of it for the purpose of this review. When you look at the tracklist, there is nothing real big to expect. Several songs come out Christian Descamps solo repertoire "Troisième Étoile À Gauche".
Actually, almost the entirety of disc one comes from this album. It sounds almost hard-rock; like what we could experience in their last studio album "La Voiture À Eau". Rather poor and uninspired. "Bilboquet" as well as "Le rêve est à rêver" com out of this album precisely. They are far from being great songs (but there were very few of that genre available on this weak album).
Fortunately the second disc will also hold some early Ange songs. I was quite enthusiast to see that "Caricatures" was featured on this live album; but I immediately have to change my mind since this "version" only last for hundred seconds. Actually, it is only a (too) fast recitation of the first part of the lyrics. What a pity to summarize this fabulous song to this masquerade.
Finally, if you want to know which ones of the songs are valuable on this double CD set, it is quite short to depict it : "Le Soir Du Diable", "Godevin Le Vilain" and "Hymne À La Vie" are the ones. Not more, unfortunately. I also would like to add that it is the third time that "Hymne À La Vie" is feautured on an Ange album. As if there are not sufficient material to choose from...