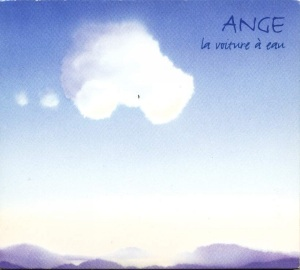 
I have had big hopes with the great Ange come-back in 1989 and their very interesting album : "Sêve Qui Peut". Unfortunately, Ange did not continue in the direction of a traditional symphonic rock in-line with their past (and lost ?) grandeur. Their album "Daï Lama" was just another French-rock album (better than their mediocre eighties production though).
Even if the family circle remains intact in terms of the amount of persons involved in the project, an earthquake has taken place in the sense that instead of Francis Décamp (a founding member), and brother of Francis, we'll get Tristan on the keys. He is the son of Francis.
We were heading the turn of the century while Ange released "La Voiture À Eau" and this time, the most obvious influence is neo- prog and jazz-rock. Ange playing this almost hard type of music is not really what I was expecting.
The opener is probably one of the heaviest Ange song so far and not at all my cup of tea. Things are seriously improving with "Psychosomagique Génie" a truely symphonic number : complex rhythm with off-beat tempo. Lush mellotron and again, wonderful and theatrical vocals. A great tribute to Leonardo Da Vinci. The next song is made of two distinctive parts (although very short) : a noisy and hard intro and a wonderful and very subtle second half (again very symphonic). As if Ange wants to break with its symphonic image but not quite want to change completely from direction.
With "Bilboquet", the mood is 100% heavy / jazzy oriented. It sounds as if Ange wants to play Michel Jonnaz (a famous French singer, rather jazzy). Not really convincing, I'm afraid. After this orgy of noises, it is good to relax with "Elle Me Fait Des Rides". Very subtle piano and crystal clear vocals. Interesting lyrics as well. Press "Next" to skip the instrumental "Eurek[a". It should be an hymn to the great discoveries of the human being, but is only interesting (again) with its second half. As if Ange could almost only write half songs.
"L'Eau Qui Dort" is a mellow and insipid jazz ballad. "Archimède" is another tribute to a great Greek mathematician and physician. This spacey song still lacks of the grandeur of its inspirer. Nice to get asleep. At least, it's one of the few prog song of the whole. Back to the mix of jazz and symph rock with "Coma Des Mortels". Still, I am absolutely not convinced in this musical direction.
When Ange reverts to its roots, it is almost to propose mellowish songs like "Quelquefois". Boring, my friends...Like the hard- rockish "Ethnies" again improving slightly with a nice keys break in the middle. The naïve and folkish "Patisonges Et Mentisseries" is only valid for the play-on-word of its title. Press next.
Same play-on-words concept for "Et Gandhi L'Indou Dit Tout Doux". Not possible to translate this one. Strongly influenced by Oriental music (India, would you believe !), it is not worse than many of the other songs available here. "La Serrure Ou La Clé" holds very sexual-oriented lyrics and is only interesting therefore. Am I vicious ?