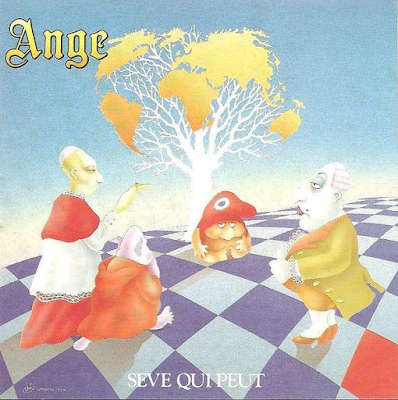 
We are heading now the end of the eighties. Ange produced extremely poor albums during this decade. The year of this release is a very special one for France. It is the one commemoration of the bi-century of the French revolution. Founding members as Brézovar and Haas are back in business and I guess it is a very good sign.
The band has always been rather anti-establishment (catholicism, politics) so it was quite a surprise that they were asked by the French government (Mr. Chevènement) to produce an opus about the French revolution.
I guess that the exreme popularity of this band in France only made this possible (and potentially their need to substantial financing).
When you look at the back cover and all the subtitles of each song; displaying incredible play-on-words (only understandable to French speaking persons, unfortunately) one might think : maybe we'll get another great Ange album (after all those horrible ones).
The opening track is rather promising. Crazy lyrics as they ought to be during their early years, heavy keys (somewhat reminiscent to ELP) are ways better than their poppish/disco sound of their recent productions.
I do not know what was the final purpose of this order from the French government, but I really do not care. At least it will be the opportunity for Ange to come back to its roots and as a die-hard fan of the band, I can only be pleased by that.
Don't get me wrong : this album is not on par with their great seventies production but at least Ange is back on track. Only this fact should please any prog fan, because this band although extremely underrated (mostly because of their incredibly complex French lyrics).
This album will hopefully bring some hope about future releases.
Ange will produce some really good songs here : "Aimer Hair", "Les Plaisirs Faciles" (especially for its lyrics). "L'Or, L'Argent Et La Lumière" is IMHHO (in my humble and honest opinion) the best song of the whole album. Fully symphonic, emotional. A song like Ange produced in their earlier albums. What a great feeling for me !
This is the reason why I will stick to my policy review. I want to review almost the entire catalogue of the bands and not only their best ones (it sounds too easy for me). This have lead to a lot of disappointment of course because it always hurt to just tell the truth about some of your preferred bands (Genesis; Yes, ELO, Heep, Kansas, Tull etc.). But when it is bad, I have no option : I just tell it is bad.
When a band produces a good album out of the blue, I am just like a child discovering the world : happy, happy, happy. And I am overwhelmed by this feeling with this album. At least some decent work !
This remind me a recent comment on a thread posted by Eric on the forum about the craziest experience to go and see a band far away from home. Well, maybe I'll go to Paris in November to see their "Olympia" show. This band has produced so many great albums that I am sure that I will just feel like the child dicovering the world I have just mentioned.
The poetry of "Les Amours-Lumière" is just enormous. Another great Ange moment. At this time of the album, I really wonder why the hell this band has released so many poor albums for such a long period and all of a sudden release a much better one. Mystery.
The only weak song by its beat (because the lyrics are completely irreverent) is "Non!". Extremely erotic (and I mean it) these lyrics are on par with their greatest moments (the early seventies). I know of no bands going that far in their "sexual" approach. But this is the typical French (and Belgian as well) way of life. So funny and devastating at the same time.
The good news, my friends is that the great Ange is back. Hopefully they will keep on with this quality.
You have understood that I will be quite generous in my rating with this album. I would rate it seven out of ten but since this is not (yet) poosible on PA, I will upgrade it to four stars (adding one star for the lyrics as I have done already for some other Ange albums). What a nice come back after eleven difficult years.
Posted by Unknown at 2:57:00 AM