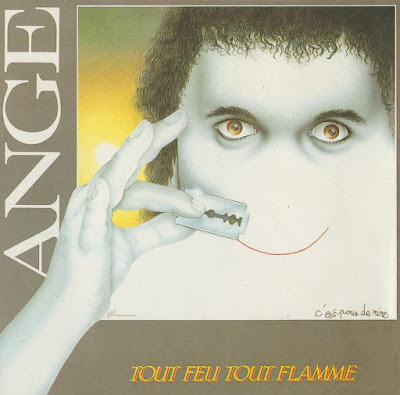 
Year after year, Ange produced very poor albums in the eighties so far. This is their seventh studio album since the great "Guet Apens". Some miserable music has been offered to the first generation fans which have turned their back already at Ange, since the band did turn his back as well from its theatrical and great symphonic music. And with such a title, the worse could be expected for this one.
For this album, Ange recreates one very old song (1971) and updates it with an eighties sound. "Tout Feu, Tout Flamme" was a very good song (their second single). Jean-Michel Brézovar and Daniel Haas (founding members of Ange) joined for this song only. Even if the original was better, this 87 version is not bad at all.

With "Tout Contre Tout", the mood gets unfortunately back to the pure rock FM sound, but "Coquille D'Oeuf" is a tranquil song : gentle rock ballad with some nice sax.

"C'est Pour De Rire" starts as a madrigal. The text is really nice and emotional. It features a son talking to his dead father and asking him how it is on the other side. It is of course dedicated to the father of the Décamps brothers who had just passed away. The music goes from spacey to jazzy to rock. Not too bad but at times pompous and a bit too long.

"Sur Les Grands Espaces Bleus" holds even some prog elements ! The text refers to better times ("Au Delà Du Délire"). The track features some nice keys and guitar work. Of course, don't think that we are back to the level of their grandiose work of the seventies. Just above par of their most recent works.

But the nightmare will start again with "3 x 1 = Nous" and "J'Suis Pas D'Ici". Very poor French rock songs. The last song of the album (the longest one, just over seven minutes) "Il Est Le Soleil" is a mellow rock ballad for half of it and will turn into a pure rock song. Not great, I'm afraid.

What we got here is actually just standard French rock music. Even if Ange does not come back to the brilliance of their past, this album is at least not as bad as some of its predecessors.
Posted by Unknown at 2:48:00 AM