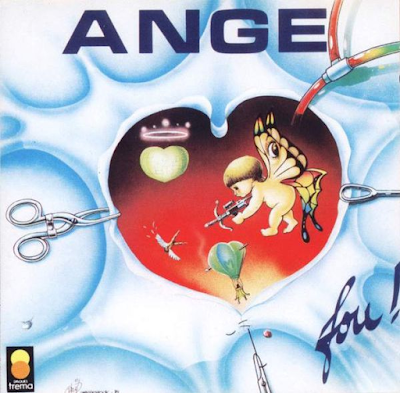 
The traditional fan of the great Ange of the seventies that I am is suffering quite a lot when he listens to their eighties production. From "Vu D'Un Chien" through "La Gare De Troyes", Ange produced rather weak (to say the least) albums.
I'm afraid that they won't release a great one with "Fou !"
Several songs have an horrible disco-beat sound "Les Yeux D'Un Fou", "(Hé !) Cobaye", while most of the others have the rock atmosphere of their previous albums. Very little prog here. Both "Guignol" are useless (especially "La Chasse")
Some numbers will have a pop/rock mood as "(Je n'suis) Là Pour Personne". Some FM music with "Piège à Coeur".
The first song being in the Ange tradition (strange ambiance and more complex structure) is "Les Fous Demandent Un Roi". It appears as a highlight on this rather weak album. But do not except a masterpiece à la "Capitaine Coeur De Miel" of course. But it is a pleasant song.
The title track is hard to categorized. Crazy I guess (as its title suggests...).
Ange will usually release some good songs (three or so) even on poor albums (except "Moteur!"). In this case there is very little to retain here. If you are keen to listen to some "special" sounds during a song, I would rather suggest you to listen to "Love On The Beat" from Serge Gainsbourg than "Crever D'Amour".