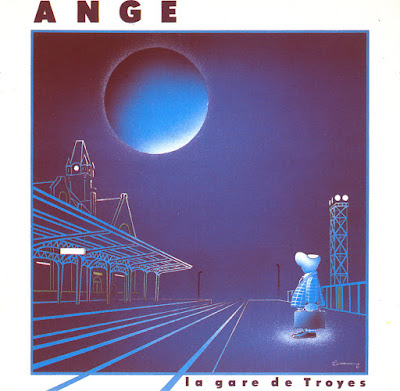 
The last two Ange albums were not really prog gems. This one is on par. Unfortunately. Line-up is the same as for their previous cover (and dispensible for most of it) album.
The beat will be almost the same : a mix between jazz, pop and disco. It is really hard to listened to it in a row (I hope I will once get a medal for this). "A Saute-Mouton" being probably the worst of all (but there are so many that it might as well be " "Questions D'générations" is only saved by the lyrics, but if you not into French, the awful rhythm of the song will kill you before reaching the end of it.
The first song to be a bit different (better ?), is "Va-T'en". Jazz-rock song wich breaks the ambient and dull disco mood. But it will be back again as soon as the next starts "Les Moments Bizarres" (of which the chorus is not too bad).
"Shéhérazade" is the first good song. Great interpretation from Christian, a nice soft- rock song with great and aerial keyboards. Almost like Ange used to produce. A rather pleasant track, honestly. "Les Jardins" are also more into the Ange tradition. At least the boring disco beat is abandoned. Again, keys play an important role in this song.
Since the fantastic "Guet-Apens", Ange did not produce a lot of songs of this caliber so, even if it does not compete with the great Ange songs, it is very much welcome here. "Neuf Heures" is a bit chaotic but also holds some romantic passages which are not too bad.
When I saw that the closing number clocked at over nine minutes, I thought that there was maybe hope to get back to the great Ange epics. But an epic is not only a matter of lenght. And this song, even if at times it sounds not too bad, is far from being a masterpiece.
As in their cover album "A Propos De", the listener will have to wait for more than half an album to start listening better stuff. But I can tell you that to bear the first three tracks of this album is truely painful. Most of the rest is average to good, so it is absolutely not an album to start with (even if you can get it for cheap).
"Caricatures", "Au Delà Du Délire" and "Guet Apens" remain the reference for me and I can only advise you to listen to these ones. "La Gare De Troyes" remains an anecdotal episode in their long career.