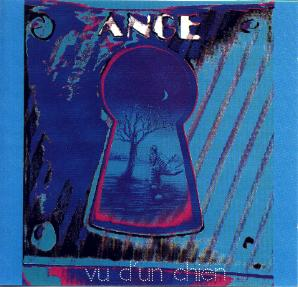 Another two years break after their superb "Guet-Apens". From the new trio of musicians that joined the band to produce it, only one will stay for "Vu D'Un Chien" (from a dog's point of view - that's what the title means). Guitar and bass will again change hands. We have seen that this turover did not affect their work previously, so I was not too much worried about these ones.
The mood is definitely harder than before (but this is the eighties, right ?). The theatrical Christian's vocals is always present but the symphonic moments are scarce. Guitar has a more important role than usual as well.
Very little long pieces here. The longest one is "Je Travaille Sans Filet", clocking at just over seven minutes. It is a good rocking number but little emotion will filter out of this one. A bit dull. As the opener "Les Temps Modernes" another one of the longest number available (over five minutes).
The best number, IMO is "Les Lorgnons" which keeps on with Ange's tradition : symphonic mood, great keys. It will be the only one of that caliber, unfortunately.
"Pour Un Rien" is also very pleasant. A short and symphonic song which reminds the glory days. It could have been a nice intro of an epic but after 2'45" it is over. "La Suisse" started as "39" from "Queen", and the end of the song is 100% jazz-rock oriented, which is not at all my cup of tea.
"Personne Au Bout Du Fil" is again almost hard-rock oriented. I have of course nothing against this type of music, but it is rather unusual to hear this from Ange. They are not particularly successful in this genre.
The title track is a funny song. As I have said in the intro, it means from a dog's point of view (or perspective). The lyrics will be a long description of what a dog feels when confronted to the human race. Good rhythmics for the third good piece of the album.
"Vu D'un Chien" is not a bad album, but most of the magic from Ange has disappeared. The great symphonic keys moments, the incredible lyrics are gone. What remains is a good French rock band. But Ange has been used his fans to much, very much better work.
Posted by Unknown at 1:42:00 AM