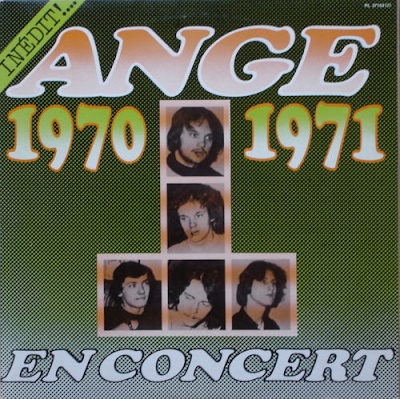 By the time they'd record their debut album, Ange has been around a while (they were already around in 69) and had already developed some ambitious music (including a rock opera) and played many concerts. This album dates from 78, but features concert tapes from 70 and 71, but Ange was against its publication, but somehow they were released, but not on Phillips, but on RCA. Actually, it's relatively easy to understand why Ange was opposed, since not only is the sound execrable and really unfit to publish as an official product, but their music was a little too derivative and paled in comparison to their professional releases. Don't get me wrong, the music is fine and the sound is not that bad (some official releases like Earthbound are worse than this), but this is not to be regarded as an official album of theirs. The recordings come from two different concerts, the first (on the disc) in March 71 with the classic line-up, while the second predates it by two months (Jan 71) and had a different line-up (no Haas, but an extra guitarist)
Sooo back in the early days, Ange had written a rock opera called La Fantastique Epopée Du Général Machin, written by the Décamps brothers and it was already a rather complex and ambitious oeuvre. What's great about this "album" is that most of the material is unheard elsewhere, with a possible exception of the opening Zup, which reminds me a track on one of their first two official album. The short concert extract opens on the afore- mentioned Zup, but the main course is a 17-mins Atome track, one that sounds halfway between Genesis (Cryme-era) and Floyd (Saucerful-era) with a touch of Who (Tommy-era) and even an Amon Duul II (Yeti-era) feel - most likely some of these influences were fortuitous. Quite interesting a track, I wished they had a better-sounding version somewhere, just to catch Ange in a psychedelic mood. The third extract Opus 69 is a short dynamic instrumental, reminiscent of a giant hogweed nature. I'm not sure why, but the last track of this double vinyl (but single Cd, which I am reviewing) is also from this line-up, but I've got no idea why this 22-mins Prophetie track is separated from the rest of its companion piece. Actually this monster track is much like Atome, but a bit more elongated and with Tull-influences (This Was-era) and the same Floyd-Genesis-ADII and Who influences, the latter though the Entwistle-like horn-blowing. Prophetie is a very enjoyable jam track, with many fun moments.
The second concert is more complete and features bits of the Général Machin rock-opera, starting with an ambitious presentation and digging right into the heart of the subject with the short title track, the much longer Assis Sur L'Univers (sitting on the universe: most likely the general's ambition) and the other tracks from this set are not quite as proggy and sound quite different: more guitarey, R'nB, the flute sounding like a toy and even less-well recorded than the first part of the release. Only Cauchemar seems more elaborate in terms of songwriting.
Personally I'd give the classic line-up concert (with Atome and Prophetie) an easy three stars , despite the poor sound, but I'd only give the first line-up's Général Machin rendition a two stars, tops. Well, if you're only a casual Ange fan, you'd better steer clear of this "album", which received two Cd reissue by Spalax (94) and Musea (97). On the other hand if you love Age, this is more likely a must-own, even if you won't listen to it so much after the initial discovery.