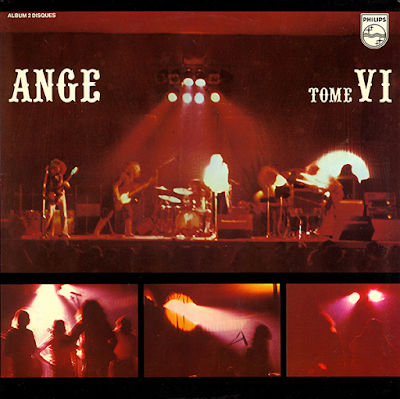 
In 1976, it was the appropriate moment to release an Ange live album. Their fame is at their peak (in France, and to a certain extent in Belgium) and they have recorded several great symphonic albums. I would say that this live album is a pivotal turnpoint in Ange's career. They will still produce some great albums after this recording but the density of the previous ones will never be matched again.
This live work starts with a trio of songs from "Au Delà du Délire" one of their masterpieces IMO. But unfortunately my two preferred tracks of the album are not featured here ("La Bataille du Sucre" and the title song, a real and extraordinary epic). We'll get three short (but very good) songs to cover this album.
When you listen to the introduction for "Ballade Pour Une Orgie" the sexual mood of the song is highlighted in a rather blunt mood. Attempt to translation.
Talking about a young lady : "and this cyprine that is flowing into your veins let the great moment escape, isn't it sweet to feel the "thing" that penetrates you into your very depths and then you do aaaah (simulating an orgasm). I am not sure about the translation of the French word "Cyprine". It is the liquid secreted by the vagina when a woman is in an excitation state. Remember, we are in 1977. And then the song starts !
There will be one song from their debut album. Actually one of their best one ever written : "Dignité". The live version will be extended to almost sixteen minutes and is one of the great moment of this record. Some instrumental parts sounds more spacey than the original. When the band starts to play it, one can feel that the audience is shivering and so happy to get this track.
To arouse the fans interest, there will be one unedited song here : "Le Chien, La Poubelle Et La Rose". During the presentation of the song (sung by Francis Descamps), one can hear : "This a tale that La Fontaine could have written". La Fontaine is a classic French author from the seventeenth century, very famous for his tales (or fables).
Very medieval mood (as one could have guessed, with such an inspirator) for this long song (over thirteen minutes) featuring a great and long guitar break to close the number. This track would have deserved to be released on an album; but let's not complain, we'll get it live and this version is just superb.
Two songs from "Jacotey". And my preferred two ones of the album. The incredible "Sur la Trace des Fées" and its Crimsonesque and scary mood, and of course "Ode À Emile". A song full of emotion and really passionate. Again two great Ange moments.
What can I say about the last two numbers of this exceptional live set ?
"Hymne À La Vie" is the best one from " Par Les fils De Mandrin" a wonderful epic built crescendo. An hypnotic middle part, a great guitar break, a very emotional vocal performance and a sublime finale. This is symph prog at its best.
From "Cimetière", the title track (and the best number) is omitted but instead we will get a live rendition of the lengendary "Ces Gens Là" from "Le Grand Jaques" as we call him in Belgium (Jacques Brel of course). This is again a poignant moment of this concert (but there are so many). They could not have chosen a better song to close a concert since the final words are "But it is already late, sir. I need to go home".
For such an old release, the sound while not being super, is very decent. The tracklist is extremely good (even if one or two of their greatest songs are not featured - but it will be taken care of in "Un P'tit Tour Et Puis S'en Vont" released in ... 1995. It is also the occasion to feel how good an entertainer Christian Décamps was during a live set.
Of course his little stories between songs are clearly Gabriel oriented. When you listen to the fabulous presentation of ""Hymne À La Vie" you will be convinced. Full of allegories and lots of emotion, indeed.
This live album might be a good entry if you would like to dicover the complew world of this great French band.
Posted by Unknown at 1:17:00 AM