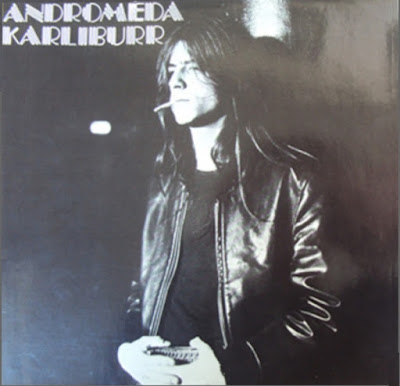 
Second album by Andromeda came out in 1980 under the title ''Karliburr'', released on the unknown Resco label.Multi-instrumentalist Karl-Heinz Engelhardt had parted ways with the band and he was replaced by female singer and flutist Rebecca Wronker.

A cigarette, a leather suit and a psychedelic gaze could have been easily a great cover for a Hard Rock album, but Andromeda seemed to go back in time with this release.They sound much more focused now, leaving behind any tendencies towards multi-influenced music and ''Karliburr'' is all about complex Symphonic Rock with some jazzy and folky touches, somewhere between the elaborate arrangements of British Prog groups and the slightly spacey Teutonic bands of the genre.Moreover this change of direction resulted to some beautiful pieces, split between almost theatrical vocals (a concept album maybe?) and very good instrumental interactions between flute, guitar and keyboards.There are plenty of Classical dressings in some organ parts and the style is showered often by a naughty electric piano and the archaic use of flutes.Compatriots METROPOLIS and the 80's underrated legends SIRIUS might be good comparisons, while the combination of slightly excessive vocal parts with the adventurous instrumental material brings to mind also French group LE GONG DU BALAYEUR.The soft guitar touches along with the melodic flute drives and the heavy use of the Moog synthesizer are good enough reasons to label GENESIS as the band's main influence at the time, but the constant display of German texts adds the proper Teutonic flavor in the compositions.Certain tracks are more folky and acoustic with flutes in evidence, while there are even some very intricate moments with a Fusion aura, highlighted by the instrumental exhibitions on guitars and keyboards and the background jazzy vibes.

Maybe the best of all Andromeda albums and definitely one of the most interesting albums of German Prog in 1980.If not, at least this one sounds so misplaced compared to the time of its release, you would swear it was launched sometime between 1972-75.Very good Symphonic Rock with some theatrical touches and a deep instrumental interest.Strongly recommended.