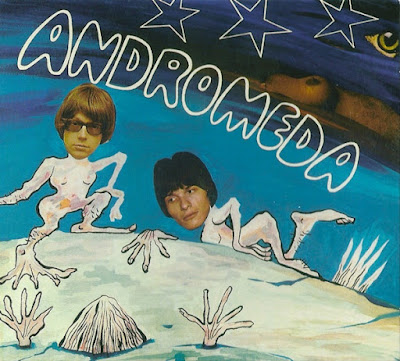 
German band ANDROMEDA rose out of obscurity to record a single, eponymous album in 1970 before falling right back into obscurity and splitting up that year. When the band is mentioned, it is sometimes compared to British band ANDROMEDA (who also released their single, eponymous album in 1969), but this has more to do with the fact that both outfits share a name. Musically, German ANDROMEDA leaves behind most of the fuzz of psychedelic rock of the late 60s, and grounds its sound in heavy organ rock layered with jazzy flourishes and a sense of humor that sounds more like the madcap ravings of COLOSSEUM than the steady hand of ATOMIC ROOSTER.

This sound was no doubt influenced by drummer Gunter STEINBORN and keyboardist Peter SCHILD, who composed most of the songs. Rounding them out were Gerry FLEMING on bass and Tony HENDRICK on guitar, who also produced their only record. That album never strays far from the keyboards, but also never manages to stay with a single style, jumping from chugging organ rock to fast piano jazz to classically influenced prog and even some last gasps of psychedelic pop. In the end, ANDROMEDA'S sound is familiar, but never quite like anyone else's, and it is perhaps a pity that they never recorded a second, more refined, record.

"Andromeda" is one those obscure early-prog bands from the beginning of 70s which managed to record only one album and disappeared forever. However while most of such bands were originated from UK or Italy, "Andromeda" is a German formation, but as they sing in English it's difficult to tell what country are they from without checking their roots first.
Anyway I'm really happy to discover their only, self-titled album 'cause it's much more original that I thought I will be. As usual in early 70', music is dominated by blazing Hammond organ sounds, but there is something specific about those guys music that can't be easily categorized. There are elements of heavy prog, jazz-rock, psychedelic rock and even many classical music-inspired symphonic prog moments.

To make things even more interesting, it's hard to tell who were the real band's members as some websites tell that Andromeda was a duo: Peter Schild on keyboards and Gunter Steinborn on drums, while bass player Gerry Fleming and guitarist Tony Hendrick were only session musicians which supported the band during the recordings. But many other websites list Fleming and Hendrick as proper members of the group. Who knows... Even more interesting fact is that there are no credits about vocalist, so we still have no idea who is singing on Andromeda's eponymous LP (maybe additional singer or maybe not?).

Mysteries aside, let's focus on songs presented on their sole record:

1. "Andromeda" - album kicks off with one the best songs which perfectly mixes organ-based hard rock with 60'-like psychedelic vocals. If you like organ sounds (like me), you will surely fall in love with "Andromeda" from the first sight, however I have to admit that vocals are a bit strange here. Somehow they often seem off-key for me. But don't worry, as the music is mainly driven by furious organ-work of Peter Schild. Many fantastic Hammond soloing (backed by rhythmic piano) of this musician here.

3. "Galaxy Of Beauty, Galaxy Of Nightmares" - is probably the weakest song on the album. For the most part it's an up-beat, easy-listening pop-rock composition with happy-sappy piano beat and repetitive lyrics. The only truly redeeming factor are those strange, church style fragments with choir-singing.

4. "A World on a Star" - just like "Cosmos Main Road", this song also starts with symphonic-sounding piano introduction. Later it develops into haunting quasi-ballad with mellow organ layers and melodic piano lines. To some extend it reminds me of Vanilla Fudge's "Season of the Witch". Similarly creepy atmosphere. Great slow-mowing, spacey organ solo here too.

5. "Space Trip" - Andromeda comes back to harder style here. "Space Trip" is at first driven by massive Hammond chops and passionate (however still not always adequate) vocals. Unfortunately soon it evolves into an extended drum solo. Gunter Steinborn is certainly a good musician and he ads some fine, spacey effects to this performance...but it's still only drum solo and drum solos are usually dull and tiresome after 1st minute or so... Thankfully for the last minute of the track organ and vocals come back, but I'm afraid it's too late to save the day.

6. "Rockets" - this one is the longest composition on the album - and along with self-titled song - it's the best one. Just like "A World on a Star", it has some haunting, ominous fragments but "Rockets" also include faster moments with finally better-sounding vocals and as always ever-present Hammond organ riffs and solos. Track finishes with great, frenetic keyboards solo performance of Peter Schild. Raw and wild!

7. "Silvery Lady Star" - the last song dangerously ventures into psych-pop territory. It has a nice classic-tingled piano intro and ballad-style singing at first, but later comes the refrain with it's "Silvery Lady Star!" lyrics, cheesy brass section and clumsy female backing vocals. To entirely bad, but I could image a better ending for this rather satisfying record.

All in all, "Andromeda" presented couple of very good compositions here. Peter Schild surely confirmed that he had rather good knowledge of different styles of organ playing (from jazz, through rock to classical) and he knew where to find competent musicians to back him up (however I have to admit that Tony Hendrick's guitar is largely inaudible). Maybe it isn't a "white crow" which should be immediately chased by all prog-rock fans, but it's definitely a minor classic.

Fans of organ-led rock from the beginning of 70s (like Bram Stoker, Rare Bird, Twogether, Still Life, Murphy Blend, Gli Alluminogeni etc.), will find quite much to enjoy here.