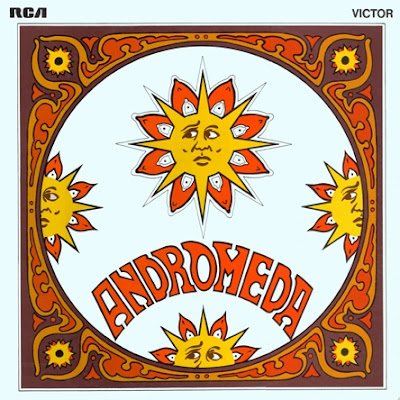 ANDROMEDA was a blend of psychedelic, progressive, jazz and hard rock power trio which lasted only enough to release one album. They were formed back in '68, by John Du Cann, later of ATOMIC ROOSTER, after the break of his previous band, THE ATTACK.

Du Cann (guitar), along with Mick Hawksworth (bass) and Jack Collins (drums), recorded a psychedelic rock project named THE FIVE DAY WEEK STRAW PEOPLE, being a concept album much praised by collectors nowadays. After recording this project, the three decided to form a band, who was called ANDROMEDA. The band started to gig, record demos, live material, etc, but without and recording contract.

In '69, they were helped by John Peel, after recording sessions in Top Gear programme. It was arranged for them to record a single, by RCA, in Peel's label Dandelion; later they signed a contract to record an album, self titled. The band had some disagreements with Peel by the time Collins left, being substituted by Ian McLane, and they broke the contract. Though the band toured with BLACK SABBATH, recorded several live radio performances and even Pete Townshend from THE WHO showed his interest to produce their album, nothing turned out as expected, but they could hold a contract with RCA, were they released their only, self- titled album in '69. The album was acclaimed by critics, but had no great success among the public, so they never released another material again. Du Cann left in late 69' going to form Atomic Rooster, along with Vincent Crane and Carl Palmer from ARTHUR BROWN BAND. The other members tried to continue with new guitarists, but the band soon split.

Their work was forgotten during the years, and only in the 90's ANDROMEDA had its material released, including extras, live material, BBC sessions, and re-releases of the first album. All their material can be found in a collection released under the name 'The Definitive Collection'. Their eponymous album was re-released remastered with bonus tracks; there are many variations of it and other albums comprising some of the material of 'The Definitive Collection'.
Andromeda (1969) comes absolutelly soaked in Blues Rock, Proto Prog and Psychedelia and is, in many ways, the precursor of some bands.

Andromeda (1969) also comes with high psychedelic colors of course (just look at the cover) in tracks like 'And Now The Sun Shines', the Cream influenced 'The Reason' and the folk driven 'I Can Stop The Sun'.

What we have in Andromeda (1969) is a beautiful and raw (recorded in less than a month) Proto Prog album with Blues Rock and Psychedelic colors. Everything packed with an amazing bass playing by Mick Hawksworth (that also played with Fuzzy Duck), solid drums by Ian McLane and loads of great guitars by John Cann and good vocals.


This two CD collection was put together and remastered by the late John Du Cann. CD1 comprises mostly recordings of Andromeda Mk II with Ian McLane on drums, while CD 2 features mostly earlier recordings with Jack Collins wielding the sticks. The style of music is progressive hard rock. Some of it sounds a little dated but much of it was really quite progressive for the time. The first eight tracks of CD 1 are from Andromeda's one and only studio album released during the lifetime of the band. It's an essential slice of heavy, progressive hard rock for anyone seriously interested in 60s rock. Also on this disc are the single "Go Your Way" and a number of demos. One of the highlights is "Return to Exodus", which the band used to close their concerts.

CD 2 opens with five tracks from sessions recorded in 1968 for John Peel's radio program "Top Gear". The recording quality is great, which can't be said for most of the other tracks that follow. Du Cann explains in the sleeve notes that the Peel Sessions were recorded with Jack Collins on drums. He was sacked before the album was recorded and replaced with Ian McLane. Du Cann claims this was because Collins' sound wasn't heavy enough. He sounds plenty heavy in the radio sessions. It's more likely he wasn't adaptable enough for what Du Cann had in mind. "Lonely Streets" is an early version of a song that appeared on a later Atomic Rooster album. Some of the tracks are live recordings from 67/68. The recording quality is poor. The final track is the last one they recorded (in 1970). It sounds quite different mainly because it features keyboard. Was Du Cann looking in another direction?

It's an interesting collection, worth the price just for the original album. The other highlights are "Keep out 'Cos I'm Dying", "Return to Exodus", "See into the Stars" and "The Reason", "Return to Sanity" and "Search On" from the radio sessions. The sleeve notes feature an interview with John Du Cann which is quite informative. There seem to be a couple of errors in the track names in the listings but overall it's a nice package. Interesting to see that Andromeda shared a bill with Black Sabbath early in 1970 ...

1966~69 Anthology" album, so I can compare for overlap. But this release contains the '69 album, their only single, a ton of bonus material, and an entire extra disc devoted to live stuff. It's all great, too; a mix of progressive hard rock, and power trio hard rock (their is a subtle difference). John Du Cann's guitar blisters on one cut after the other. Of the 34 total tracks offered, all but 3 rate at least a B-, and fully one half are worth a B+ or better! Throw in a great big booklet to round out the package, and you know you're getting your money's worth. A true hard rock lover's dream! Incidentally, I own an original LP, and the sound on this CD is comparatively excellent.