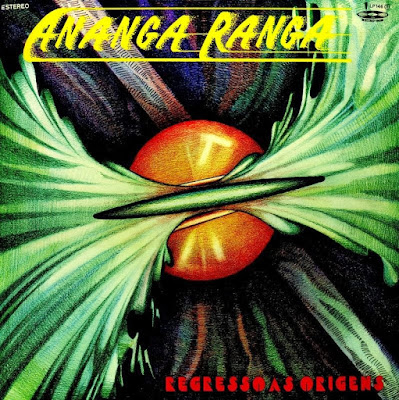 
Obscure Portuguese band, started in 1976 with Luis Firmino on guitars/vocals, Alvaro on bass/vocals, Manuel Barreto on piano/vocals, Necas on drums, Rui Pedroso on keyboards and Pantera on percussion.Initially they played in a Classic Prog vein close to the likes of GENESIS, MANFRED MANN'S EARTH BAND and CAMEL.By the time they signed a contract Pantera, Alvaro and Pedroso had quit and Vasco Alves handled the bass.They released two commercial singles in 1979 on Metro-Som along with the album ''Regresso as Origens'', featuring also Carlos Zíngaro on violin and Manuel Garcia on saxes.

By late-70's Ananga Ranga had switched into a more Jazz-Rock style and the album has strong hints of THE DIXIE DREGS' and JEAN LUC PONTY's music.The atmosphere is pleasant, the performances quite challenging and the arrangements intricate enough to satisfy the fans of the jazzy side of Progressive Rock moves.Lots of melodic passages and solos led by Garcia's saxes and virtuosic violin plays by Zingaro.Barreto has a very sharp style of playing his keyboards with plenty of synths and electric piano in his armour.What really shines is also the magnificent fiery guitar playing of Luis Firmino, not often appeared throughout the listening, but with a great delivery overall.Of course the tracks have sometimes a commercial edge both on production and style with some Funk moves and light, almost cheesy and easily acceptable Jazz-Rock at moments, quite reasonable for a band performing during late-70's.

Far from being an essential entry, ''Regresso as Origens'' shows an uncommercial band struggling to survive during a commercial era, reflecting the fact on their sound.Still this is well-played, adventuruous and rich Progressive/Jazz-Rock for the major part of the album an, thus warmly recommended.
Posted by Unknown at 4:30:00 AM