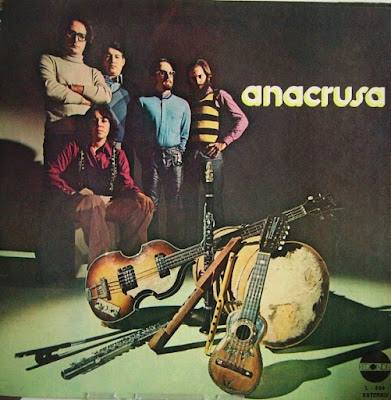 Among the interesting bands of Argentinian Folk Rock, Anacrusa hailed from Buenos Aires and were formed in 1972 around the talents of female singer/keyboardist Susana Lago and guitarist Jose Luis Castineira De Dios.Their self-titled debut from 1973 included no less than six additional musicians: Guitarists Narciso Omar Espinoza and Jackye Tricore, bassist Tony Bonfyls, drummer Andres Arpino, sax player Pierre Gozzes and violin player Patrice Mondon.De Dios was also responsible for some of the traditional string instruments heard in the album such as the charango and the cuatro.
A very delicate and romantic Prog Folk album, Anacrusa's debut explores the roots of South-American Folk with more contemporary echoes, resulting series of short but interesting arrangements and intense, poetic tracks.One foot steps on the combination of archaic-styled Folk tunes with more jazzy stylings, offering a weird Folk/Fusion amalgam with smooth interplays and elegant passages.Guitars, bass and drums are the most dominant instruments in these plays.The other foot passes through more symphonic arrangements, a bit like the folky side of PREMIATA FORNERIA MARCONI, with excellent flute lines and peaceful piano textures leading the way into somekind of genuine Chamber Folk.These are executed in mostly instrumental offerings, of course always supported by acoustic guitars.There are still a few pieces that sound like Latin poems, led by Lagos' lyrical expressions and strongly grounded in Latin Folk with no further ambitions, yet these are also very nice and work well within the chosen atmosphere by the band.
Posted by Unknown at 3:43:00 AM