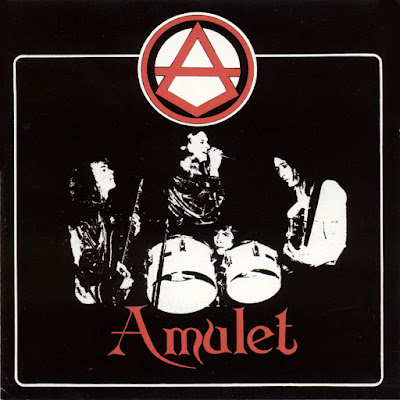 
Long-haired guitar rawk from the obscure Midwestern band known as Amulet, circa 1980. Reissued for your hessian pleasure by Monster Records, alongside the likes of Ultra, Full Moon, and Truth And Janey. Amulet started off in '78 as a cover band doing stuff by ZZ Top, Van Halen, Hendrix, UFO and suchlike. Though a popular local concert draw, they still barely managed to save enough dough to record and self-release this album in 1980. No money for overdubs, so it's got that live feel, appropriate for their party hardy high power hard rock format.

t's an extremely rare collector record that was recorded in 1979 and released on the band's own label! Punchy hard rock with screaming lead guitars all over the place! This is excellent piece of classic progressive heavyrock
Posted by Unknown at 3:03:00 AM