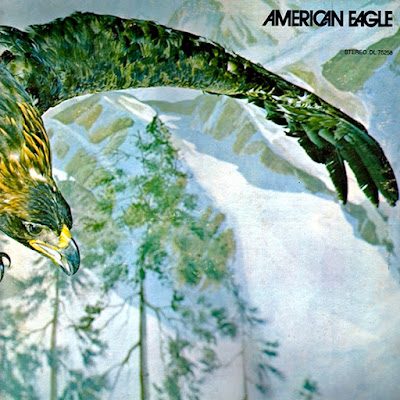 Previously known as the Surprise Package (with Mike Rogers instead of Gene Hubbard) these guys line age stretches way back through numerous Pacific Northwest bands including the Viceroys, Galaxies and Rock Collection. They appear to have been based in California by this time. The album is predominantly straight-ahead riff-heavy rock with soulful vocals. The Vanilla Fudge style rework of the Moody Blues' Nights In White Satin drives that particular comparison home.

Rob Lowery was lead vocalist for The Galaxies. He joined when he was about 14 and spent 6 years with the group. When he was twenty he went on to join national recording artists, "The Surprise Package" (aka The Viceroys) which was produced by Lee Hazelwood and put out the album Free Up, in 1969, plus several single recordings. After leaving Hazelwood's record company the group changed their name to American Eagle and put out another album titled “American Eagle” in 1970, on Decca records....at present one of the harder to find Decca albums, it contains several killer tracks in 'On The Rack', 'Paper Box', 'Draw The Line' & 'So Satisfied'....plus a great version of 'Nights In White Satin'. There are also some excellent melodic vocals on several tracks which contrast well with the strong lead vocals.

This album was played throughout the nation and was popular in Germany and Sweden. Although the band never gained the notoriety it deserved, they were the opening act for major rock groups of the time including: The Beach Boys, Led Zeppelin and Jethro Tull. Rob left the music industry in the early nineties to raise a family and began a successful career as an antiques dealer in Seattle (Classic Antiques) and ultimately opening Cafe Neo combining it within the antique store to create a unique dining and antiquing experience. Currently he is the owner of income property in Seattle and Everett.


The group’s roots go back to the Seattle Washington area where Greg Beck and Fred Zuefeldt were members of the Viceroys, who also included future Raider Jim “Harpo” Valley, prior to this recording, the group recorded an album for Lee Hazlewood’s LHI label as Surprise Package releasing “Free Up” in 1968.

American Eagle is basically the same band as the Surprise Package. They released this album about a year after the dissolution of the Package in the fall of 1969. Where the emphasis was on psychedelia on the previous album, here the band covers straightforward rock with a slight gospel rural feel to it. Highlights are “On The Rack” and a fine version of the Moody Blues’ “Nights In White Satin” that recalls the Vanilla Fudge.
(~redtelephone66)  Jack Dominilla
Posted by Unknown at 2:39:00 AM