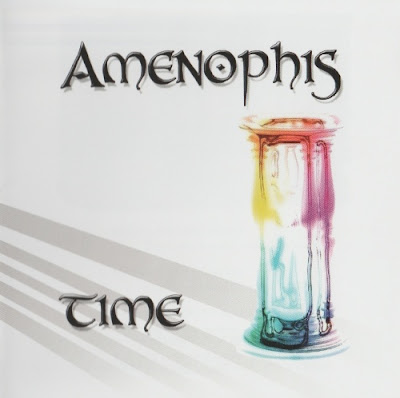 
AMENOPHIS' self titled 1983 debut is regarded by many as a masterpiece of symphonic prog. Its moody and mystical world enveloped the listener in a spell not broken until sometime after the last bonus track (yes, bonus track!) had reached homeopathic decibel levels. Unfortunately, the album achieved little sales success, and the band was only able to release a follow up if it met certain commercial standards, hence "You and I" from 1988, a decent pop prog album but with few of its predecessor's charms. It sold only a little better, and that was pretty much that, perhaps.
In the intervening 26 years, particularly in the internet age, it was easy for fans to track the micro movements of the group via their web site and the openness of MIchael Roessman via email. Snippets of unreleased tracks gave hope that the band's heart was really in the extended prog compositions and arrangements, and, freed from any pretensions of commercial success, they could return to that well of inspiration. Sure enough, a full quarter century later, they have returned with "Time". Two of the original three members remain, with the album being dedicated to the third, Stefan Roessman, who in 1988 was unfortunately already too ill to soldier on.

The "Overdue Overture" pays respect to long time fans in title and in sound, by incorporating passages from at least one early track, and includes at least one theme to follow on "Time". I attempted the exercise of identifying more but finally succumbed to its iridescence. From here the band alternates through a series of good to excellent tracks of varying lengths and progressive pedigrees. The result is a blend of the previous two releases, but with a pristine production that generally enhances but sometimes detracts from the experience. If you are familiar with th first album, you will understand even if you don't agree.

Both Michael Roessman and Kurt Poppe shine on guitars and keys respectively and the shared vocals are far superior to what has come before. The band continues to draw justified if simplistic comparisons to YES, GENESIS, CAMEL, ELOY, and ANYONE's DAUGHTER among others. Back when I reviewed ERIS PLUVIA's excellent "Third Eye Light" in 2010 (itself released after a near 20 year gap), I drew some comparisons to Amenophis on one of the tracks, and sure enough the favor has been returned , on "Puppet Master". "The Sandglass Symphony" and "Avalon" are cut from a similar cloth, elaborate and sweeping, with a variety of blended passages, "Avalon" being more epic, including funky bass, spanish styled guitars, and soaring leads. "Some Times" and "You" are both lovely ballads, the latter reminding me of something John Lennon might have done. You might find it a bit sappy, but you might also not be able to shake the melody, and the majestic outro will win you over anyway.

Now we get to "Mrs April McMay", the most accessible track here. I don't think Marshall McLuhan had this in mind when he coined the famous "The Media is the Message" maxim. Here we have a testosterone driven, presumably middle aged man, collapsed on his easy chair as the lovely Mrs McMay dispenses the bad news of the day, to which he is gleefully immune. A similar theme was explored decades ago by Aussies REDGUM in "It doesn't matter to me". Listen for the "footage" at the end in which April with utter professionalism announces the end of the world. Musically this is also a breezy indulgence. "The Wheel of Time" is my least favourite, and could have been and maybe was a rerecorded outtake from "You and I". A couple of very short tracks are thrown in, the better of which is "Intermission", with lovely Crimson like flute and piano. I need to mention that, while the debate rages on about possibly uncredited flute on the first album that might have been synthesizer, this is definitely the woodwind and it is, again, uncredited, at least on the band website.

I will always hope for Amenophis to offer up an album to compare with their 1983 beginnings, but that is unfair. What we have here is an updated labour of love performed by artists for whom music springs from the spirit. I know there are some other fine pieces in the vaults, like "Sylvan Faun", and hope that the next wait is shorter. After all, most of us who were "there" don't have that much time to wait.