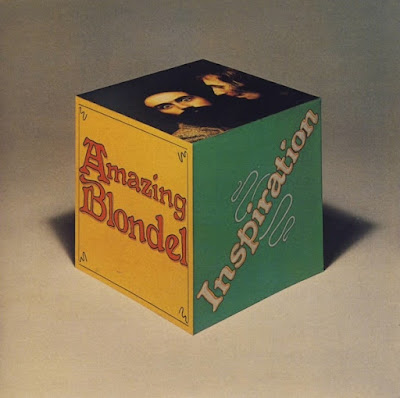 
With "Mulgrave Street", you could feel a decline coming on, but "Inspiration" surprisingly reversed the trend at least for the moment. This is actually a substantially better album in a similar soft-rock folky style, with uniformly strong melodies, lyrics and the benefit of judicious orchestration courtesy of Del Newman and Adrian Hopkins.
The opening and closing tracks are the most progressive, but don't get too excited. We aren't talking proghead material. Nonetheless, the combined "All the Time for You/Inspiration" flows from an uptempo happy tune to a more reflective ballad and back. "Thinking of You" is a simply wonderful ballad that finishes even more impressively with piano and strings. "You didn't Have to Lie About it" can be compared with the Beatles "It's Getting Better" musically, very upbeat even though the theme is deceit in love. The next great track is the brief, heavily orchestrated "The Lovers", where Blondel digs back into its Elizabethan past at least for the lyrics. Told from the point of view of a serf speaking to his master, he claims that the mistress loves him. I imagine this is the sort of thing that he is practicing in front of the mirror before telling it to his master's face, if ever! "Good Time Gertie" is actually a pleasant little Genesis-inspired number - think "I know what I like" in a way.

Wow that was just side 1. Side 2 is just as strong, starting with "On a Night Like this", a gentle song that always makes me think of being warm inside on a cold winter night. Gentle acoustic guitars back the excellent vocal harmonies. Again the orchestral backing arranged by Del Newman is impossible to ignore but also not obtrusive. "Love Song" is a similar story musically. While the album is very mellow, each side contains some up tempo material. "Standing by my window" is one of my favourites, from the verses to the majestic middle 8, and includes great work on sax, closing with harmonies that would make better known vocal acts green with envy. "Be So Happy" is a fast paced optimistic song featuring plenty of strings and brass that closes with an extended instrumental . In other words, within the realm of subdued music, "Inspiration" has plenty of contrasts.

If the idea of Beatles influenced soft rock, but with less flash than the Beatles, is appealing to you, or if you know the earlier work of this great band and want to see an example of an artistically successful transition, this album is highly recommended, if you can find it!
Posted by Unknown at 10:30:00 PM