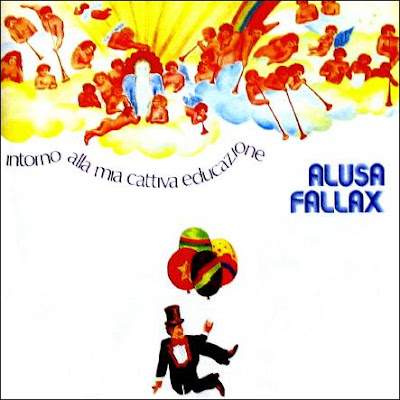 
ALUSA FALLAX are amongst the ranks of Italian prog bands who only released one album in their career, perhaps surprising when you realise the band existed for around ten years.

The band was formed in Milan in 1969 by keyboard player Massimo Parretti who went in search of musicians to play on a piece of music he'd been asked to write. His search led him to GLI ADELFI, a band that featured an old school friend on guitar and vocals, Guido Gabet. Impressed, Parretti enlisted their help but shortcomings with the keyboard player led him to take his place for the recording. The band changing its name to ALUSA FALLAX was completed by three brothers with the surname Cirla, Augusto (drums, vocals and recorder), Guido (bass and vocals) and Mario (sax, flute, French horn and vocals).

The result was a single titled "Dedicato A Chi Amo" followed the same year by another called "Tutto Passa". They then started playing live shows but it wasn't until 1974 that the album "Intorno Alla Mia Cattiva Educazione" was released. Musically the album is largely in a symphonic style with classical and occasional jazz influences, with intelligent utilization of acoustic and electric instrumentation. Although comprising of thirteen tracks they are divided into two long suites with strong musicianship throughout.

The album received very little promotion and was only pressed in a quantity of 5000. They continued to make their living from the live circuit but not through playing progressive rock. Disco became big news towards the end of the seventies and they adopted this style for their live shows and even released a single under the name BLIZZARD before finally splitting up in 1979.

'Intorno Alla Mia Cattiva Educazione' is one of those excellent yet overlooked one-shot Italian albums, fortunately recued from the vaults of oblivion thanks to the CD technology. The style of Alusa Fallax is "typically Italian", so to speak: emotional, richly melodic, full of classical nuances and folky acoustic touches. By incorporating a bunch of rocky sections and jazzy passages (...and even some Latin rumba!), the band achieves a repertoire whose complexity may remind the listener of some of the Italian top bands (PFM, BMS, Delirium), as well as early Genesis. Since this is a concept album, it is no surprise that all tracks are linked in a continuing sequence: the segues are fluid enpugh to make the final result compact and cohesive. The flute and keyboard parts are the most abundant ingredients in the mix, though it's fair to say that the electric guitar solos and sax multilayered orchestrations are quite impressive, too: some of the latter remind me of VdGG Jackson's excursions. The rhythm section is precise and versatile. Drummer Duty Cirla's vocal range remind me of Leonardo Sasso's (Locanda delle Fate), though his style is not as romantic, but actually more similar to the bluesy tempered anger of Alvaro Fella (Jumbo). The thread of tracks 1 to 7 (Side 1) is my favourite parte of the album, since I feel that the repertoire becomes a bit repetitive from track 8 onwards (Side 2). Usually, the instrumental passages are used for the development of demanding time signatures, while the sung sections are set on a calmer tempo, as if designed to enhance the ceremonious note conveyed in the lyrics. th eexception is 'carta Carbone', whose sung section is set on a rumba tempo, with the instrumenta lcoda reiterating the same chord progressions on a playful Baroque note. Apparently, the tracks in Side 2 are more somber, with only a few moments of real intensity among the predominant melancholic ambiences. The closing track is majestic in a typically symphonic fashion. All in all, given the inventiveness exhibited in the compositions and the musicians' ability to function as an ensemble, my overall diagnose is positive. This is a great album designed to be enjoyed as a unified whole.