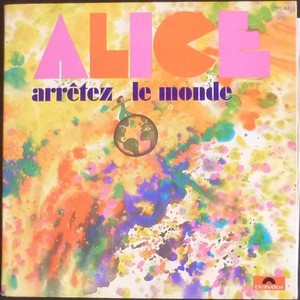 Second (and last) album from this early French Psych-prog rock group with one of the best album title ever: Arrêtez Le Monde (stop the planet/world) as in "stop the bus ride, let me out here". Behind this title, Alice's music is still the same despite line-up changes. Still lead by Alain Suzan, the multi-instrumentalist quintet is a triple guitar group with Suzan also chipping in flute and doing bass duties. Uncredited horns (mainly sax, but also a full section) are sprinkled throughout the album. Despite being recorded at the famed (well not yet) Hérouville studio, there are times where you'd swear this is a garage products with some cringey moments, with vocals being the weakest point.

After a small instrumental intro where Suzan's flute dominated over some heavy chords, the album verses into Salina, a good mid-tempo song that evolves constantly and often comes close to perfection. The great 13-mins mini-suite title track is the first time we hear their voices (except for small outbreaks in Salina) and the track is not far from being an end- of-Beatles Harrison track. Byzance returns to the heavy Crimson-ian moods that we'd heard sketches off in the introduction. A very pastoral flute over wind gusts, it could sound like a Crimson track of the first album, but it goes nowhere before the title track returns to end the album's first side.

The flipside opens with the short promising Ouverture (meaning, we're expecting another mini-suite), before letting the savage guitars rampage through les Roseaux (reeds, the plants) one of the weaker track along with "Quelqu'un qui t'aime" (atrocious vocals and ill- advised guitars), but Franky l'Oiseau is definitely not better-inspired with flawed vocals and again bad guitars. The closing two-parts Le Cercle turns 180° and turns out to be a real masterpiece despite an arduous start in the first part, but the second part shows just how majestic the album could've been with some masterful constantly changing prog that often nears perfection, coming with an exciting sax solo and some brass arrangements. Amazing stuff?. Too bad there is not more of it on this album.

Definitely a two sided story, this album starts out quite fine (despite sounding a bit amateur) but quickly turns catastrophic once you flip it over, with only the last track to tip the balance the right way. Sooooo Alice is a risky business for progheads that want flawless albums, and in this case, they might have to settle for a half album and couple it with the debut album and the singles, to get something damn good.