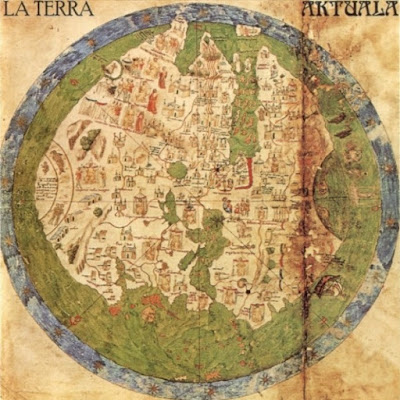 "La Terra" brings us some non-symphonic progressive greetings from Italy. In Aktuala's music many different styles blend as an unique ethnic batik, which should please the ears of the fans of world music and improvisational hypnotics.
The records begins with "Mina", an accordion associating first with western music, but this first impression is soon blurred with the tablas bringing Indian feeling to the sound. As the track opens, freely soloing tenor instruments start floating around, forming a Middle-East like patterns. The ecstatic rhythm pauses for awhile, until it is brought back by pounding dark voices. "Mud" begins with a haunting Islamic theme, which is accompanied by a hypnotic acoustic string instrument and the tablas. The dance of this trio morphs later as faster guitar driven passage, and the flute is changed to a jazzy saxophone, which brings some European influences along to this ethnic mix. Later a strong sound of a bow instrument is introduced, caressing the pulsing rhythm intensively in euphoric manner. Third impression "Sar" rises like a spider climbing up by it's web, which is weaved by help of high pitched harp strings, and soon the music begins to swirl around peacefully, allowing the baritone strings, tablas and flutes to start their geometrical movements, leading to a furious acoustic run.

The last title song is the longest one of the four, lasting a bit over ten minutes, as the three previous had duration between six to eight minutes. The beginning of "La Terra" is a large peaceful space created by an Indian like monotonous drone, some casual touches of metallic percussive and bird-like shrieks. Guitars begin to carve out concrete shapes from this hazy mist, and later a flute and a harp are joined. Tempo starts to grow slowly, reaching the climax after about five minutes, leaving relaxing guitar patterns to linger in the air. Another variation of this run follows soon, lead by the pulse of a mouth harp, then fading into the silence.

Along with few other uses of in and out fadings done during the mixing of this album, it is hard for me to find anything else to criticize on this fabulous album. And these solutions are not as irritating in this kind of slow and ethereal music, as they can be when used in rock music. This record can be recommended to be listened whilst burning incenses, charming snakes and among other activites of mystic piety.
Posted by Unknown at 8:59:00 PM