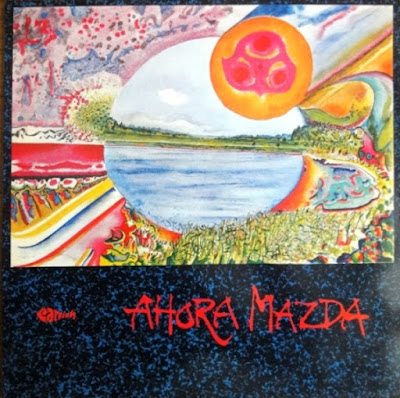 
This delightful Dutch band had its roots in 1965, when Rob van Wageningen (flute, saxophone) and Peter (bass) and Winky Abbink (drums) brothers played together in a band called Free Art Group, along with other musicians. This band played music, mostly inspired by classic and avant-garde jazz musicians, namely, Ornette Coleman, Sun Ra and John Coltrane.

In 1968, they were joined by Tony Schreuder in bass, renaming themselves Group 67/68, and Peter Abbink switching to guitar. During concerts in Felix Meritis they met Ruud Tegelaar, manager of center Fantasio, who offered them to become the house band in Fantasio. They also changed their name once again to Ahora Mazda, a corrupt version of the chief deity of Zoroastrianism, Ahura Mazda. (Zarathustra religion is also called "Mazdaizm.) The name was suggested by Tegelaar.

The band was known for their long jam sessions, but they recorded shorter and more arranged songs for their self-titled debut (and only) album. The album was recorded in three days and released on May 31, 1970.

During the next year, Tony Schreuder and Winky Abbink had some problems playing and rehearsing. At concerts they needed the help of substitute musicians, like guitarist Jan Landkroon and Michiel Krijnen. Abbink was replaced by Paul van Wageningen, who played drums in Groep 1850. Because of these difficulties and the lack of atmosphere that came with the substitutes the band ceased to exist.

Their music is a reflection of the "spacy" music (as implied by the name of the first track in the album) in Netherlands, yet, they owe more to the Kosmische Music scene of Germany than the symphonic approach of their fellow countrymen such as Focus, and of those which were yet to come, like Kayak and Finch. Though the tracks are relatively short (the longest clocking shortly over 9 minutes), they still retain the "jamming" and "experimental" features, which are landmarks of the kosmische Krautrock sound. The CD reissue adds 5 shorter bonus tracks, which still have the same characteristics.

This album is a really fabulous psychedelic nugget from the land of the flowers and the windmills. It combines both more close-to-earth flute fronted bluesy jazz rock in style of German Rufus Zuphall and free freak-out improvisational soundscapes with some really cool jazz styled saxophones. These both elements are presented in the funny opening track "Spacy Tracy", telling us a tale of a girl interested in the psychedelic way of life, starting as a mellow groovy rocker later morphing as completely free improvisation. "Timeless Dream" is then a minor key melodic tune, having sadly a quite disturbing fade-out ending taking place in the middle of the song. The two following about eight minutes long songs combine again the freeform improvisations and nice themes, featuring some very good jazz saxophone tunes from Mr. van Wageningen, and also Peter Abbink blows some really good raw electric guitar solos in style of Jimi Hendrix and Manuel Göttsching. "Power" is one of the few mostly constructed songs, containing really weird and scary effects used in the singing verse, creating a very mysterious overall feeling.
The last five bonus tracks are a bunch of excerpts from the band's collective jazz improvisations, which sound sometimes resemble the primitive passages of Syd Barrett's "Lanky", sometimes the cosmic electronic sound walls of Hawkwind. Sadly the excerpts are only cuts, varying in length from under two minutes to over four, beginning and ending from a silent void. I wouldn't have mind hearing some improvisation "mistakes", rather the hearing only glimpses of the grooves. But anyway, I really liked the little melancholic but still laid back feeling of this album, and I would recommend it warmly to anybody liking both 70's psychedelic blues/jazz rock and dreamy impressionistic collective jams. Also the flute melodies are here very strong, so the fans of that instrument might want to try giving this album a listen.
Posted by Unknown at 5:50:00 PM