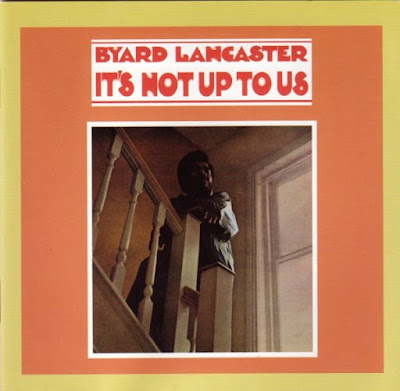 
When John Coltrane succumbed to cancer in 1967, free jazz/fire music was sucked into a giant vacuum along with him. A patron of music and patron saint to so many of its players, there was a crossroads left in his wake. Electric instrumentation was slowly seeping in from one side, and with it, its rockist and studio-manipulated pleasures. Miles Davis employed electric keyboards, punched in solos and seamlessly edited tracks in this era, and is an obvious example, as are folks like Eddie Harris and Charles Lloyd, who were similarly amplifying and opening for rock groups at the Fillmore West. The other route was to take the music even further out into the cosmos, as Albert Ayler did with his inner-being blues holler or the Art Ensemble of Chicago, with their Pan-African extrapolations into the primal unknown. Few attempts were made fto find a middle ground though, that could mingle jazz with rock, or free-playing in a more palatable pop manner without falling victim to the later Fusion craze. Or at least so I thought, until coming across this Byard Lancaster reissue of his debut recording as band leader.
What strikes me first is the overall melodic sensibility of each of the players. Lancaster, on alto sax and flute, would go on to play with outsider luminaries like Sun Ra, Bill Dixon, and Fred Hopkins. Sharrock's violently strummed strings on Black Woman and Monkey Pockie-Boo led to the vortices of Sonic Youth, Fugazi, and pretty much all future physical guitarists. Eric Gravatt would soon join an early version of Weather Report, yet everyone defers their skronkier, unrestrained abilities to the overall structure of each tune. This gives the Anglo folk base of some of Lancaster's compositions plenty room to be heard and hummed. Even moodier pieces like "Last Summer" move smoothly as panther haunches, Sharrock's playing clean and lissome over the slowly bowed, bassy sinews of Jerome Hunter as the band tenses and glides about the flute line.
"John's Children"-- an overt reference to their own state as post-Coltrane players-- has the undulating modal walk of a Jimmy Garrison bassline, incessantly prying open the infinite portal as Byard cries down into the void. The horn's palpable "space" is coated by producer Joel Dorn with enough reverb as to make his alto sound as if its emitted from the recesses of a cave, the guitar, congas, and cymbals a dizzying whirlwind of bats about him. Lancaster trills along with Sonny's humming bumblebee blurs and stinging single-string tones in their homage to Ayler, "Mr. A.A." The chord progressions are the most rock-sounding I've cmoe across from this era of jazz, and the pan-pipe flits that the flute elicits echo not only Henry "Ragtime" Thomas but the contemporary Canned Heat update "Goin' Up Country".
The flute that tweets over the stomp of "Dogtown" recollects those weird Herbie Mann records that had Sharrock on them and its conga-clapped coda is a real sign of the studio's presence, as the tape speeds the hits into a blur, dropping us into the stunning rendition of "Over the Rainbow". Lancaster's take would be noteworthy enough, but it's the way certain notes are bandied about, held in space by Dorn over the deep bass gurgle, that creates dozens of little whirls within the song, the melody expanded but the fabric never shredded. After such a poignant solo turn, it seems the nine-minute closer has him there in presence only, and it's just the guitar-bass-drum trio that fully imbibes this dynamic, heavily breathing dark music, heaving like tides in the deepest night. Not surprisingly, it's entitled "Satan", an unsettling way to end this singular jazz session.