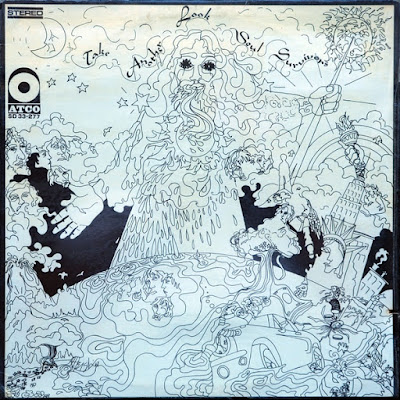 
The Soul Survivors were an American, Philadelphia-based R&B group, founded by New York natives Richie and Charlie Ingui and Kenny Jeremiah, known for their 1967 hit single "Expressway to Your Heart", which was the first hit by Philadelphia soul record producers and songwriters Kenny Gamble and Leon Huff.

The Soul Survivors first played together in New York under the name The Dedications, founded by member Kenny Jeremiah, who released several singles under this name in 1962 and 1964. They adopted the name Soul Survivors in 1965. They signed to Philadelphia label Crimson Records, who put them in touch with Gamble & Huff. "Expressway to Your Heart" was a #1 hit regionally in Philadelphia and New York in the fall of 1967, and the tune reached #4 on the Billboard Hot 100 nationally. "Expressway to Your Heart" spent 15 weeks in the charts and sold over one million copies.

The follow-up was "Explosion in Your Soul, which was not as successful (U.S. #33); a third release, "Impossible Mission", also was a minor hit in 1969 (U.S. #68). They quit playing for a few years, but re-formed with a different lineup in 1972. They had one more hit, "City of Brotherly Love" in 1974. In the 1970s, the group lost its record contract and its manager and eventually disbanded. Charlie Ingui became a landscaper, Richie Ingui became a house painter, Paul Venturini became a restaurateur, and drummer Joe Forgione owned an auto body shop. In 1987, the Inqui brothers began playing occasional gigs as the original Soul Survivors and signed a five-record contract in 1991 with Society Hill Records. As of 2006, they were playing occasional dates in the Eastern United States.

Chuck Trois also went on to release a solo 45 rpm single on A&M Records in August 1969, with "Mr. Holmes" on one side, and "A National Band" on the other. 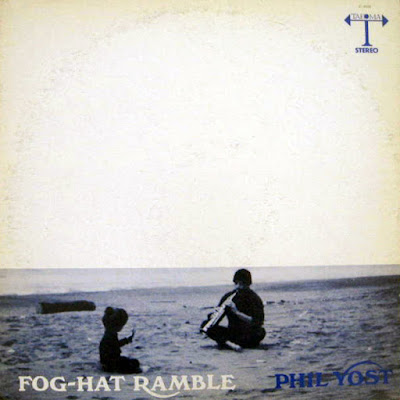 01. Orange Kite Waltz
02. Fog-Hat Ramble
03. Through The Abacus Backwards
04. Across The Somersault Region
05. Look For Me In Eastrod, Mary O
06. The Day Those Free-Balloon Races Passed Over Candy-Warp Crossings


Known for occupying the fringe of the Takoma roster alongside Craig Leon and Charlie Nothing, multi-instrumentalist Phil Yost recorded two classic albums, Bent City & Fog-Hat Ramble, for the label before releasing his third, Touchwood's Dream, on his own. Using Soprano Sax, Flute, Bass, Guitar and Percussion, Yost creates a unique form of Psychedelic Folk-Jazz that reflects the natural beauty of the San Francisco Bay Area he called home.
Posted by Unknown at 7:57:00 PM 2 comments: Links to this post 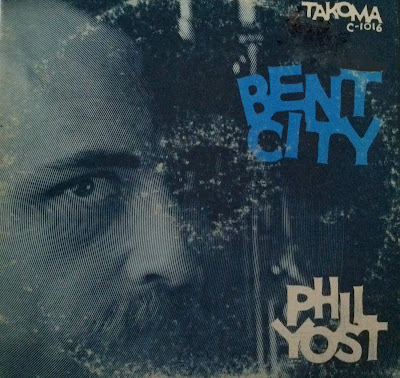 
Fascinating, over-dubbed free jazz. The "freedom" here is perhaps not to be found in it spontaneity - with each additional layer, Yost's recording process clearly becomes more measured and compositional - but in its freedom of individuality, in its complete artistic control and in its unfettered personal vision.

The dark, reverberating hallways of the twinned title tracks seem to herald post-punk or industrial music. The peak is perhaps "Vision at 1000 Centigrade", a feverish echo-chamber of forlorn voice, wailing sax, clanking guitar and scraping strings, a visceral transmission of terror and dismay from the cerebral recesses of a man awol on LSD.
Posted by Unknown at 7:37:00 PM 1 comment: Links to this post

Peter Walker - 1968 - Second Poem to Karmela or Gypsies are Important

Peter Walker
1968
Second Poem to Karmela or Gypsies are Important 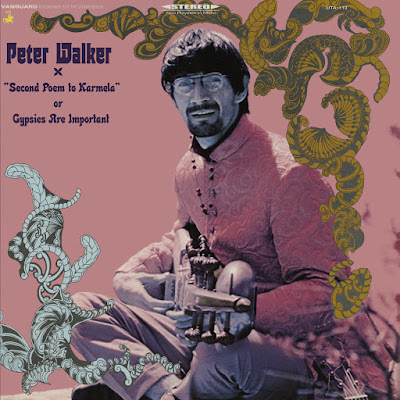 Originally released in 1968 on Vanguard Records, Peter Walker’s album “Second Poem To Karmela” Or Gypsies Are Important was a ground breaking blend of folk, raga, psychedelia, Eastern and Modal sounds that has remained unsung for decades. While his debut album for Vanguard, Rainy Day Raga, has been reissued several times on LP and CD, this album (his sophomore effort), remains an obscure and hard to find vinyl relic. Until now….

Carefully re-mastered from the original tapes, guitar scholar Glenn Jones recently interviewed Peter Walker for hours and has written a book-deep essay for the CD and LP liner notes that detail Walker’s association with an incredible cross-section of 1960’s counter-culture icons including LSD guru Timothy Leary (Walker personally provided ‘the soundtrack’ to many a trip), he studied raga music with Ali Akbar Khan, and like his close friend Sandy Bull, Walker worked on a fusion of Western and Eastern sounds. Jim Pepper plays flute on Second Poem (he also recorded with The Fugs and Don Cherry), other accompaniment to Walker’s guitar, Sarod and Sitar playing includes violin, organ, tablas, and tamboura. 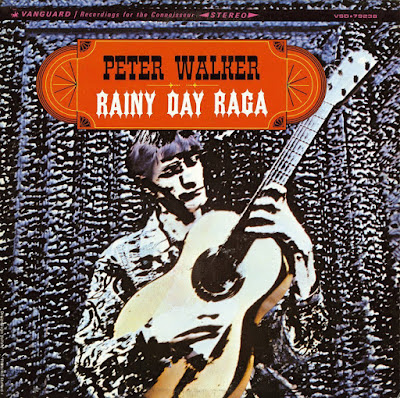 
American folk guitarist. Born in 1938 in Boston, MA. His music often referenced flamenco and Indian classical forms. Walker was a central figure in the Greenwich Village folk scene of the sixties, where he was particularly close to Karen Dalton and Sandy Bull. His debut LP "Rainy Day Raga" was released by Vanguard Records in 1966, followed by the release of "Second Poem" in 1968. In 2007 he was coaxed out of retirement by the Tompkins Square label.

Pleasant acoustic guitar excursions that I'd be more likely to lump together with Sandy Bull than John Fahey or Robbie Basho because they're a bit noodly.  It's worth noting that, unlike most of Fahey's or Basho's work, this isn't straight solo guitar--it's solo guitar a la Astral Weeks, with acoustic bass, percussion and even a bit of jazzy flute.  Unlike Astral Weeks' meanderings, though, Rainy Day Raga's aren't anchored by discernible melodies and the overall sound becomes pretty homogeneous after just a couple of tracks.  Likewise, Walker's playing style is somewhat static and doesn't often change from strumming while laying out single-note lines, which only adds to the samey sound.  Nevertheless, it's hard to fault the album's mellow mood and there are a couple genuinely ecstatic crescendos.

46 minutes in length approximately. The sound is very good-warm and clean, with good delineation between the various instruments, and the highs and lows. The booklet contains a synopsis of Peter Walker's life in and out of music, including a short piece by Walker concerning the album. There's also a couple of period photos of Walker, and a reprint of the original album cover for the booklet.

Peter Walker's music is a cross between acoustic folk guitar, middle eastern raga music, and a bit of flamenco, all blended together to make a (even today) soothing, interesting, exciting, attention getting album. The use of bells and tambourines (Bruce Langhorne-familiar from his association with Bob Dylan), a 12 string guitar used for a droning sound (Alex Lukeman), flute (Jeremy Steig), a tamboura (Jean Pierre Merle) for more percussion, an "Om" (Peter Winters), and another 12 steel-string guitar (Monte Dunn), to beef up the sound-really gives this music an edge. All the tunes are by Walker except THE BEATLES' "Norwegian Wood".

Walker fits in with then contemporaries John Fahey, Leo Kottke, Peter Lang, Sandy Bull, etc. in his attempts to broaden the use of the acoustic guitar in instrumental music. His deft finger picking or rapidly strummed chords (sounding at times a bit like Tim Buckley and Lee Underwood) is a delight to hear. His arrangements range from soft, quiet passages ("Norwegian Wood"), to a fuller sound ("Road To Marscotta"), which give the album much needed depth and breath. Jazz player Jeremy Steig's flute work is very delicate and fits Walker's music perfectly, and when playing together ("Spring"), it's easy to get lost in there wonderful interplay. The various percussion instruments were fairly unknown at the time (mid/late 60's), and give the music at times, a decidedly exotic sound.

Anyone who likes Fahey/Kottke/Lang/Bull/et al will like this album. Even after all these years the music is still exciting, still important, still a delight to hear, and can sit next to other guitarists working in the same area. "April In Cambridge" or "River" are both beautifully played as any of the above guitarists work-listen and hear for yourself.