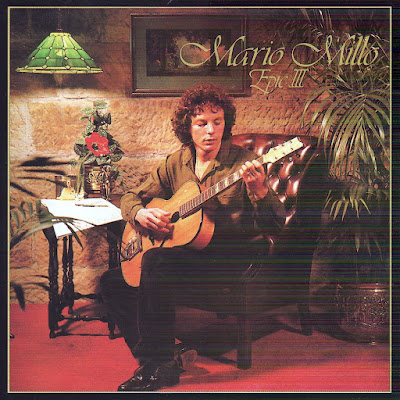 
Born to Italian parents in 1955, Mario Millo is an Australian guitar virtuoso, mostly known for his performances with Sebastian Hardie and its reincarnation Windchase from mid- to late-70's.After the disbanding of Windchase Millo collaborated with Jon English for the soundtrack of the TV series ''Against the wind''.In 1979 Millo released on Polydor Records his debut solo album ''Epic III''.On this album Millo is helped among others by ex-Bakery/Syrius bassist Jackie Orszáczky and ex-Spectrum/Ayers Rock drummer Mark Kennedy.The album opens with the Progressive/Fusion 14-min. self-titled epic, where Millo shows off his clear Camel-esque influences with his excellent virtuosic playing, supported by the funky bass lines of Orszaczky and the electric piano of keyboardist Peter Kenny, while at moments he uses the folk notes of his mandolin, actually the first instrument he ever got in hand at the age of five.''Life in Our Hands'' reminds a lot of Millo's days with Sebastian Hardie,Melodic Rock with a memorable chorus, fairly commercial but not cheesy at all, while ''Mary's theme'' is absolutely fabulous with a mix of Symphonic and Canterbury-Fusion style close to Camel and fantastic chords by Millo.''Quest Theme'' is dominated by synths, acoustic guitars, flutes and choirs, creating a pastoral Symohonic Rock experience, but ''Harlequin and Columbine'' is absolutely dull, male and female vocals are blended with dated cinematic orchestrated music, a track totally out of place.The short ''Castaway'' is again in Progressive/Fusion realms with nice guitar work, while ''Sogno D'amore'' closes the album's original version in a very Camel-esque mood with bluesy guitars and orchestrated strings.Millo prooved that he can stand alone easily, delivering a series of outstanding performances on ''Epic III'', though the album is not coherent as a whole and has a light commercial vibe in a couple of tracks.Still,the man belongs to the first league of Progressive Rock guitarists and deserves some more recognition.
Posted by Unknown at 7:21:00 PM 4 comments: