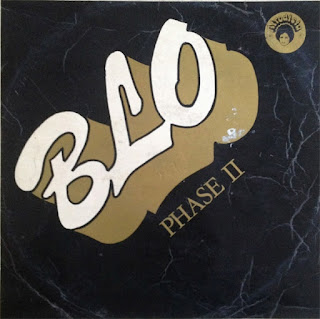 
Ginger Baker had long avowed an interest in African music. In fact, his drum-pounding on Cream's biggest hit, "Sunshine of Your Love" has sometimes been described by critics as "neo-African." (Baker later confessed that the inspiration behind the "heavy on the one" drum pattern on that record was not Africa per se, but rather the "OOM-pah-pah-pah-OOM-pah-pah-pah" rhythm that characterized the drums of the Injuns in old cowboy movies.) Baker decided to study African music firsthand and traveled to Nigeria twice between 1970 and 1971. During these expeditions, he jammed with local musicians, including Twins Seven Seven, Fela Ransome-Kuti, percussionist Remi Kabaka and Joni Haastrup (the latter two he took back to England to play in the second iteration of his Airforce band. He also had the pleasure of sharing the stage with a band called The Clusters.

The Clusters had been one of the longest-running and most popular of the schoolboy highlife-cum-rock & roll bands of the mid- to late 1960s. Laolu Akins had been the band's drummer from the get-go, but Berkley Jones had only recently joined (as an Igbo, Jones had been in Biafra during the war, himself playing drums in a band called The Figures). Also joining the band after the war were Haastrup and bassist Mike "Gbenga" Odumosu. The Clusters' management was intent on gathering the tightest collection of musicians possible in order to compete with Geraldo Pino & His Heartbeats, who were still dominating Lagos and intimidating all the musicians within city limits.

At the same time, Swiss-Nigerian flautist Tee Mac, inspired by the success of Afro-rock band Osibisa wanted to put together a new African supergroup to tour Europe. He stole Akins, Jones and Odumosu, and along with the twin sisters Taiwo and Kehinde Lijadu, he formed the Afrocollection.

One of the freshest emerging trends in post-Woodstock rock music was the Third World-influenced rock of bands like Osibisa, Santana and The Wailers; when Ginger Baker stepped into Lagos for the thrd time, he was keen on the idea of forming an African rock outfit, and with its lineup including his Clusters buddies, Tee Mac's Afrocollection looked like just the band to fit the bill.

Baker took the Afrocolletion (minus Tee Mac) and renamed them Salt. They made their debut at Fela's Afro-Spot in the summer of 1972, took the stage at the Olympic Jazz Festival in Munich and then toured Europe, the US and Canada. It's not known why this group never recorded an album, but at the end of the Salt tour in late 1972, the Lijadu Sisters left to put togeter their own band, Joni Haastrup went off with Monomono and Berkley Jones, Mike Odumosu and Laolu Akins joined forces to form BLO.

In Africa, popular entertainment had traditionally revolved around orchestras, and bands were usually large, cumbersome affairs--the idea of a lean African power trio was very new, very sexy, very modern. Akins, Odumosu and Jones definitely had the chop to carry a band on their own, and with the new multitrack recording technology, they were positioned as the band to lift Nigerian rock beyond the semi-hacky garage realm in which it had heretofore been situated.

BLO's debut album, Chapter One, was released in 1973. (I know I said in the last post that it was 1972. It wasn't. It was 1973. My bad. I'll go back and fix that post later.) Even before one even took the record out of its sleeve, its high-minded intentions were announced by the sleeve's abstract artwork and gatefold design. I'm assuming you've heard the record yourself by now, so I'm not going to waste too much wordage talking about what it sounds like. As is the case with Ofege, I wish the singing was better, but as a band they are miles ahead of the impishly charming Ofege, offering some pretty solid songs and interesting uses of the studio. Not to mention, of course, the fact that as instrumentalists, they just straight tear shit up.

In 1975, the band got into the studio to record the followup, Phase 2, produced by the three members of the band. The tone on this album is funkier than the straight acid-rock of Chapter One; Friday Pozo aids Laolu on the congas, and Joni Haastrup contributes organ to all the tracks, except for track 1 (the self-introductory "BLO") on which the electric piano is played by Segun Bucknor.

Here's what the band's manager Tony Amadi had to say in the notes on the back of the album:

THE MAKING OF BLO

Utilizing organ and electric piano for tighter effect, Africa's first trio are into a freshivating polyrhythmic funk that is richly embellished in sophistication - and bound to generate mass appeal.

The introductory tune is the musical expression of BLO, written by bassist Mike Odumosu: B for 'funky guitar', L for 'thunder drumming' and O for 'smoothy bass' and the back-up music spells just that.

Laolu comes up with 'Its gonna be a good day' where some of the funkiest guitar solos of the album are unleashed. "Native Doctor" is the lengthy masterpiece of mixed tempo by Berkley Jones which plodes on for more than seven minutes.

The diversity of BLO music is expressed in full on side two and you sure are into a party time where you can dance yourself out (if you wish).

"Do it you'll like it" by Berkley sets in pace, followed by Mike's emotional love song "Don't take her away from me" to the cool and bluesy "Whole lot of shit", then the finale - Laolu's thunderous native yoruba beat called "ATIDE" which means that BLO have arrived, musically of course.

Phase Two was recorded in 9 sessions of 12 hours each from 6 p.m. to 6 a.m. It was so strenous that on the 9th session Engineer Emma Akpabio decided to go on strike "because of too many worries by BLO" whose drive for perfection remain unmatched. 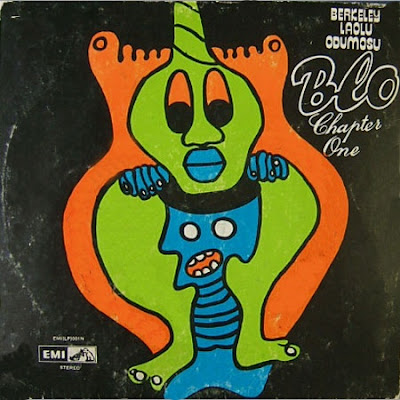 
Chapter One was Blo s debut album, originally released by EMI in 1973. The group was remarkable for a variety of reasons: it was arguably the first rock trio to emerge from Africa, and its members had a pedigree like few others at the time, having worked as part of
Ginger Baker s band Salt in the years leading to their formation. But the album s enduring appeal and significance resides in the music:
eight tracks of infectious afro-rock that took the band s Afrobeat
foundations and melded them with the western psychedelia, rock, and funk of the late sixties. Making the most of the band s trio format, Chapter One features outstanding guitar work from Jones backed by the funky interplay of Akintobi s drums and Odumosu s bass. Many of the album tracks are remarkable in how they balance a clearly rock-inspired drive with an otherworldly, psychedelic vibe.