Question Mark
1974
Be Nice to the People 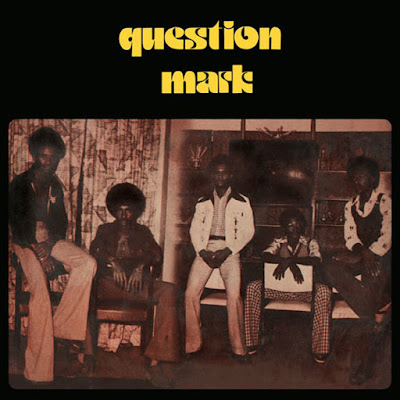 
In an album full of curiosities this Nigerian quintet composed of percussionist Uzo Agulefo, lead guitarist Victor Egbe, bassist Amehi Lzuorah, singer/keyboard player Frank Lzuorah, and drummer Chyke Okaforsomehow ended up recorded 1974's "Question Mark" in Kenya.  Produced by fellow Nigerian Odion Iruoje (then riding on a crest of influence having gotten Fela Kuti signed to EMI), the album was originally released in 1974m though outside of their native Nigeria it doesn't seem to have met with much success.  (For all I know it didn't do squat in Nigeria either.)  While the Shadoks reissue didn't carry any writing credits, the assumption was that all eight tracks were band originals.  All of the material was performed in English and these guys had clearly been listening to lots of Western radio.  Sure there were African influences throughout the set; particularly bassist Lzuorah's innovative rhythm patterns ('Be Nice To People'), but the major influences were clearly UK and US rock bands.  Anyone expecting to hear a collection of social, economic, and political activism was probably going to be disappoint by the collection since these guys seemed more interested in getting laid than saving the world. (Mary Anne')  Guess you've got to set your own priorities ...   Musically these guys weren't the most accomplished band you've ever heard.  Frank Lzuorah was an okay singer with a pleasant enough voice (and no accent),  though these guys were pretty ragged when it came to the vocal harmonies department.  Judging by the back cover photo Okafor was easily the best dressed member of the band, but his drumming credentials were somewhat suspect.  You were occasionally left to wonder if he was hearing the same backing track as the rest of the band.  While he wasn't featured all that often, lead guitarist Egbe was pretty good and had a knack for using a fuzz pedal - check out his performances on the opener 'Have You?' and 'Freaking Out'.  Too bad he wasn't featured more often.  The sound quality wasn't half bad and even though the performances weren't the most technically sophisticated stuff you've ever heard, their sophomoric garage sound (check out the goofy lyrics and off key harmonies on 'Hey Hey Girl') made it quite appealing to my ears.  Yeah, if pressed I'd probably go for Witch, but not by much ...

As far as I can tell the one LP was it for these guys.  Anyone got more info on 'em?  Let me know.