Xhol Caravan
2005
Talking To My Soul 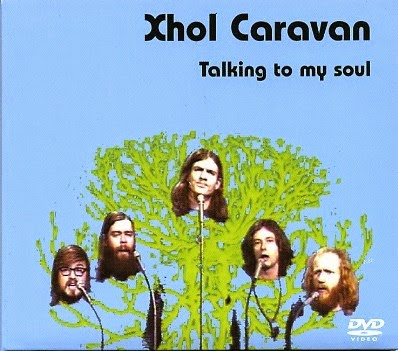 A huge surprise, and unexpected until the week it was released, this DVD documents a special TV broadcast of Xhol Caravan live on Baden Baden's SWF music show in 1970.
Complete with really psychedelic visuals and some extraordinary Dada vocal interludes, it comprises of three large tracks: All Green we know from ELECTRIP, here given a crazy amount of electronic processing. In fact it's now easy to understand why Xhol Caravan were so different for a psychedelic fusion band, the two winds players (Tim Belbe and Hansi Fischer) used almost as much effects processing as someone like Cluster, and the organ was totally electrified by ring modulation and echo devices. Talking To My Soul we only know as part of the "Freedom Opera" from 1968, and here trips on a much more cosmic level. Oszillogram seems familiar, but seems to be totally original, and is full of surprises.
As a bonus, the DVD also includes versions of All Green performed live by the reformed incarnation, from 2003 and 2004, and whilst excellent, are pretty conventional compare to the 1970 one.