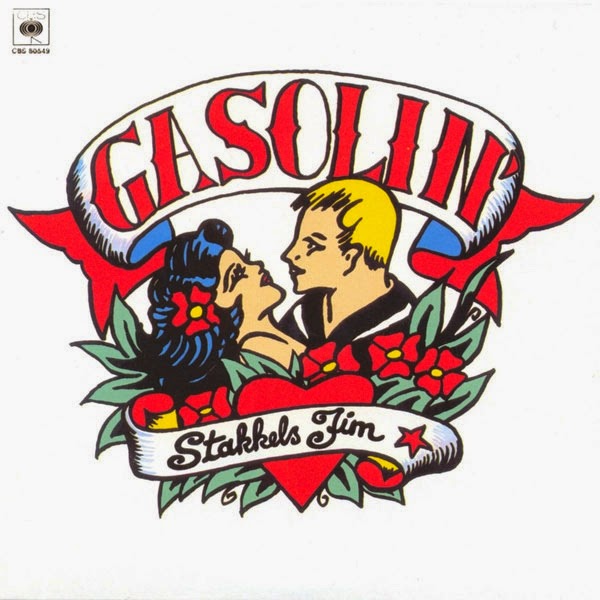 The raw rock of Gasolin' 3 would on this record be replaced by a more polished and bombastic sound, and for the first time strings would be incorporated. Stakkels Jim does not rock as hard as Gasolin' 3 and songs such as "Bingo" and "Perron 'Gare du Nord' " are quite poppish. However, epic rock songs such as "Legenden om Josha og Ming" and the title song, which was based on the "Auld lang syne" melody, would be the blueprint for their next album, Gas 5.

Stakkels Jim (translation: Poor Jim) was recorded in Rosenberg Studio in Copenhagen with Freddy Hansson as sound engineer. From this album "Onkel 'How Do You Do' " / "Johnny Lee" and "Bingo" / "Alla-Tin-Gala" were released as singles. Stakkels Jim was also released in England with English lyrics as The Last Jim in November 1974.

Stakkels Jim was released on cd in 1987 with Gasolin' 3, but due to lack of space "Legenden om Josha og Ming" and "Johnny Lee" were omitted. In 1991 it was remastered for cd and it is also included in The Black Box (2003). 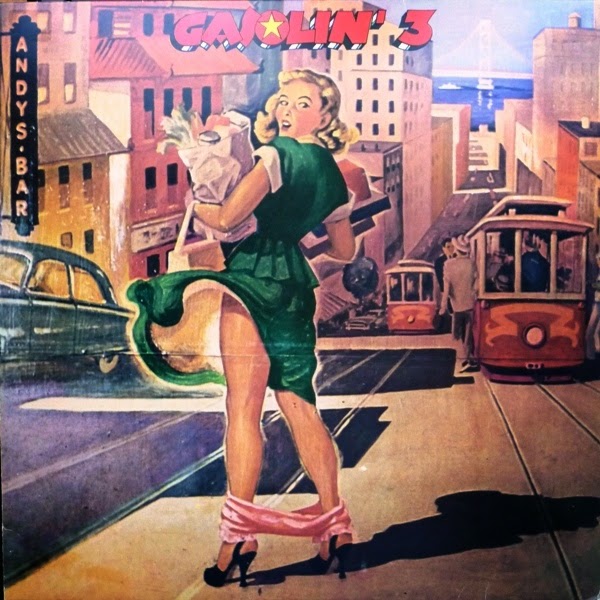 Record number 3 from 1973, and the first record whith an international producer. The record was produced by Roy T Baker, which became very well known a few years later when he produced the english band Queen. This record contains hits as: "Smukke Linda" and "Det Var Inga, Katinka Og Smukke Charlie På Sin Harley" among others. The record was to be chosen as the record of the year in 1973 in Danish National Radio.
Posted by Unknown at 3:15:00 PM 2 comments: Links to this post 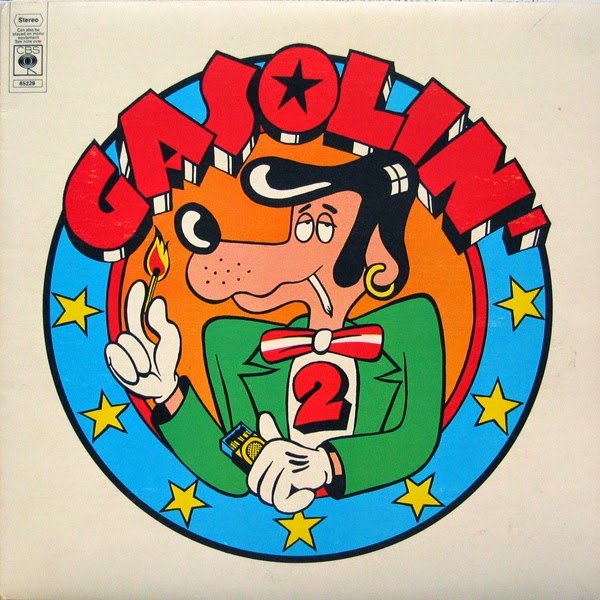 
Gasolin' 2 was released in November 1972 and was received very well by the critics and the public. Musically they would loosen up after the sombre music of their debut album. "På en sommerdag", "Fi-fi dong" and "På banen" are up-tempo and jolly rock songs that would become popular in concert. "Se din by fra tårnets top", "Snehvide" (Snow white) and "Nanna" are slower songs with lyrics inspired by left-wing humanity. The latter song was also released on Kim Larsen's Værsgo (1973). Overall, Gasolin' 2 has a laid back and cosy ambience.

Gasolin' 2 has one song not written by the band: "Min tøs" that is better known as "Where Did You Sleep Last Night" by Lead Belly. From this album "På en sommerdag" / "Se din by fra tårnets top" and "På banen" / "Min tøs" were released as singles. The cover album drawing was by Peder Bundgaard, he would go on to make their future album covers as well (with the exception of Gør det noget). 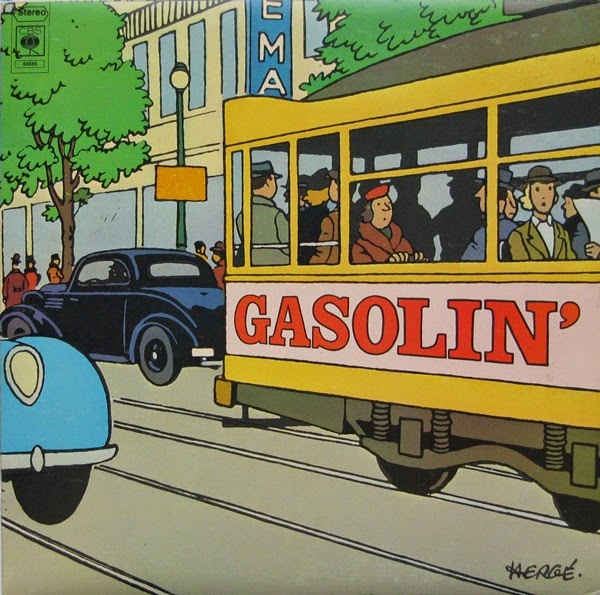 Formed in 1969, the initial Gasolin' line-up featured the talents of by lead guitarist Franz Beckerlee, singer Kim Larsen, bassist Wili Jønsso, and drummer Bjørn Uglebjerg. In 1970 the band scored a contract with the small Spectator label, releasing their debut single:

Following a personnel change that saw original drummer Uglebjerg replaced by Søren Berlev, the group returned with a third single:

Like the earlier singles, this one did little commercially, but rather than dropping the band CBS management elected to finance an album - 1971's self-produced "Gasolin'" (also referred to as "Gas 1").. Unlike their earlier singles the debut album found the band writing and performing in Danish. It may have done wonders for domestic sales, but essentially ensured the album never had a chance of breaking through in the States. Shame since the performances were quite impressive.   Larsen certainly had an impressive voice; raw and rock and roll ready.  While he may not have been the most original guitarist you've every encountered, Beckerlee was more than capable of churning out excellent lead guitar moves (check out his performance on 'Fra Dag Til Dag'.   The big problem remained the Danish lyrics.   Say what you will about the language, but it lacked the fluidity of French, or Spanish which meant, no matter how strong his vocals, Larsen's performances came off as harsh and gutteral - check out 'Laphophora Williamsii'.  I've sometimes found myself making up my own English words to the songs.  By the way, I've always loved the Hergé designed cover art.

(side 1)
1.) Langebro (traditional - Kim Larsen - Wili Jønsson - Franz Beckerlee)- 3:20
Their version of the traditional ballad 'Geordie' sounded like it was heavily inspired by Baez' cover (which had been renamed 'London Bridge'). They also transplanted the location from London to Copenhagen, though they kept the song's original dark and somber tone. Larsen clearly had an impressive voice, though the Danish lyrics were completely lost to my ears.  Nice harmony vocals throughout.  The track was tapped as a Danish single.   For anyone interested, YouTube has what appears to be a 1990's Danish television  performance of the tune by a solo Larsen: https://www.youtube.com/watch?v=omDlmQHhXdI   rating: *** stars
2.) Hej Christoffer (Kim Larsen - Franz Beckerlee) - 4:13
Powered by some tasty Beckerlee lead guitar 'Hej Christoffer' was a surprisingly commercial and radio-friendly pop-rock tune.  Surprisingly this one was tapped as a single.   rating: **** stars
3.) Fra Dag Til Dag (Wili Jønsson - Franz Beckerlee) - 4:26
Nice hard rock tune carried by more first-rate Beckerlee lead guitar.  In terms of overall quality this one could have given most English bands a run for their money.     rating: **** stars
4.) Lille Henry (Kim Larsen)- 2:28
Pretty, largely acoustic ballad.   rating: *** stars
5.) Tremastet Beton  (Will Jønsson - Mogens Mogensen)- 5:29
'Tremastet Beton' sported a pretty melody (perhaps the album's best), but wasn't so much a song as an opportunity for Danish poet and sometimes musical collaborator Mogens Mogensen to recite some of his work.  No idea what it was about, though Mogensen seemed to get kind of riled up towards the end ...   rating: ** stars

The album's Dutch single was: