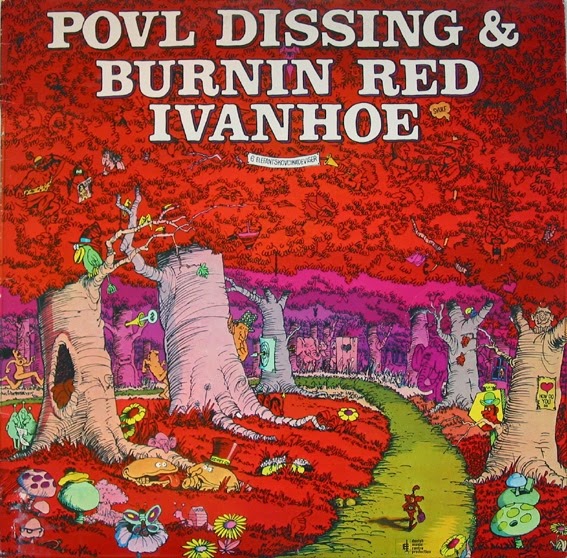 6 Elefantskovcikadeviser is the fourth studio album from Danish progressive jazz/ rock act Burnin´ Red Ivanhoe. Or rather it´s a collaboration between Burnin´ Red Ivanhoe and Danish folk singer Povl Dissing. Poul Dissing was and still is one of the most prolific musicians on the Danish music scene. Ask any Dane and they will know who Povl Dissing is. His most famous work is called Svantes Viser and it´s an album he did in collaboration with prolific Danish poet and author Benny Andersen.
Burnin´ Red Ivanhoe´s normal progressive jazz/ rock approach has been left in the background on 6 Elefantskovcikadeviser which is basically a folk rock album with Danish sung lyrics. Burnin´ Red Ivanhoe is known for their elaborate intrumental sections, but on this album the instrumentation is a bit more stripped down.

The album consists of nine tracks, but there are really only six real songs on the album as Introduction sigvaldi, Kometen v sigvaldi and Introduction til Medardus are basically only some live talking. Wallifanten is the first real song and it´s great. One of the best songs on the album. It´s also the first song where we´re introduced to Povl Dissing´s characteristic voice. Narrevise is the next song. Again it´s a great folky track but it´s the next song Snehvidekys ( Snowwhite Kiss) which takes the price as the best song on the album for me. It ´s an extremely beautiful and emotionally sung love song that really moves me. Ta fri ta fri us another great bluesy folk rock song and the same can be said about Et Samfund which is the only song on the album where Povl Dissing doesn´t sing. Ole Fick handles the vocals on this song as he usually does on Burnin´ Red Ivanhoe´s albums. Tingel-Tangelmanden is a reworking of the original track from the debut and it has extensive soloing during it´s 10:27 minutes and some great vocals from Povl Dissing. This is probably the song that will be most enjoyable for fans of the first three classic albums from the band ( M144, Burnin´ Red Ivanhoe and W.W.W.).

The musicianship is as always excellent even though this music is much more basic than the more challenging playing which takes place on the first three albums from the band. Povl Dissing will be an aquired taste, first of all because he sings in Danish but also because of his distinct vocal style which will probably scare some people away( he is very famous in Denmark because of his vocal style and his poetic lyrics). Despite of the lineup info here on PA, the sleeve notes on the original album says that it´s the same lineup who recorded W.W.W. who also recorded this album just with the addition of Povl Dissing on the latter.

The production is excellent. Nothing to complain about there. 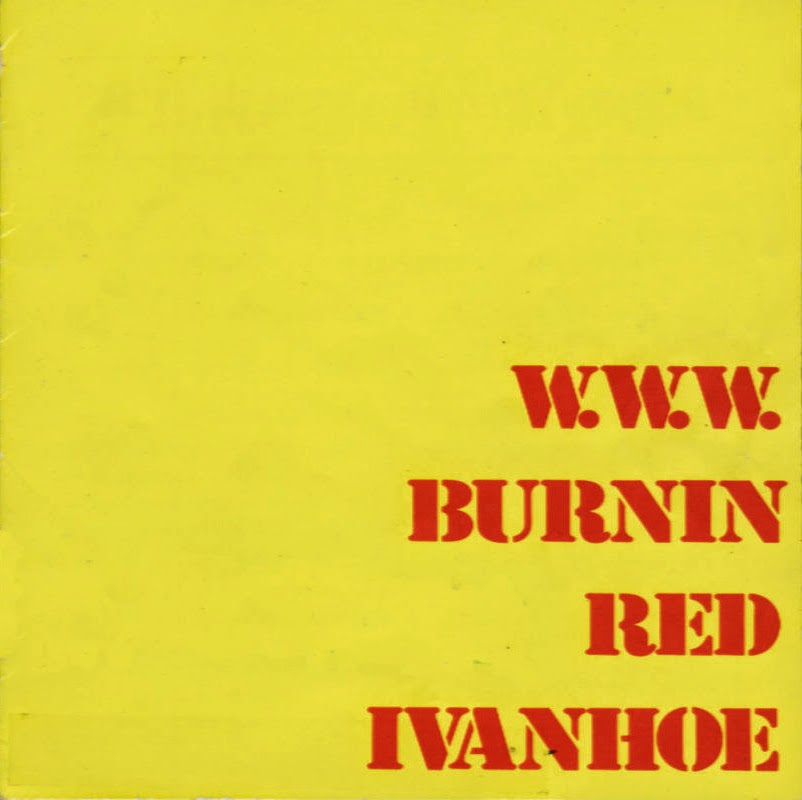 
Burnin’ Red Ivanhoe was formed back in 1967 in Denmark. Their style is an interesting blend of early scandinavian jazz/art-rock and R&B. The band’s approach to music is quite refreshing and original, the album has an uplifting and very energetic (almost naive) mood. The music has a certain scandinavian touch, difficult to explain.

Lots of instruments (flute, sax, trombone, piano, organ, acoustic & electric guitars etc.), which is always nice, and there’s a lot of variation in the mix, as the guys are not afraid to use some of the more exotic instruments..

Obviously the band was having time to tour England and they wrote this excellent track about their hotel in Croydon after a gig in Fairfield Hall where Menzer’s flute resembles that of Traffic’s Chris Wood. Some of the other sonic similarities that can be heard are reminiscent of the excellent German group Out Of Focus. The title track starts out dreamily as an oriental-desert psyched-out trip: you could almost see the early 70's hippies crossing Iran on their way to Kathmandu in their Combi VW while listening to this. Close to the best German groups such as Embryo, this track is a pure delight. With almost no transition we veer into Kaskelain, which is definitely more dynamic and brilliantly played and ends up in motif that is exactly the one that the next track uses to pick up the pieces. Karsemore, this tracks starts almost basic but soon veers into a demented jazz-psyched out rock. Cool stuff and the band is on top of their game in this lengthy three-piece suite. After another stand out track “Oblong Serenade” is a phenomenal succession of blistering solos over a great rhythm and a fitting outro for the album.

Traffic, Out Of Focus, Colosseum… Does it not make your mouth salivate? 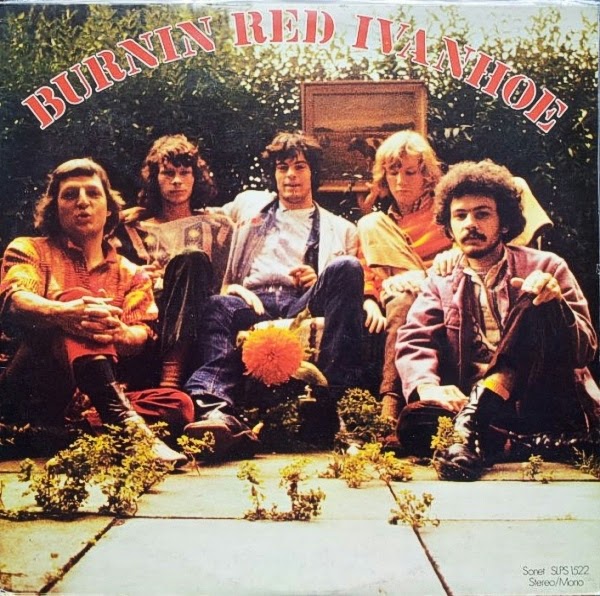 With their second album (this time a single), BRI maintains the impressive standard that they had managed on the double debut, but the line-up was reduced by a pair and was left a quintet. And in terms of musical adventures, there are a few progressions, but the eponymous album is proud successor of M144. Still with Colosseum as one of the most evident influence, BRI pulls a much more consistent second album with many excellent jazz rock tracks pulling more towards the brass rock of Chicago Transit Authority rather than the future fusion-like Miles Davis or Tony Williams.
Recorded in London and produced by Tony Reeves (of.. Colosseum, small world uh?), this album presents many longer tracks (only the final track of M144 was above the 5:30 min mark) giving effectively more interplay time to Vogel, Menzer and new guitarist Fick. There is less of the downright blues influences of their debut as they have given way to a much more satisfying psychey-jazz feel. Great tracks like Windowsill, Gong Gong Elephant Song (what where these guys smoking?), and the closing slow-developping Secret Oyster Bar

Great acoustic Canaltrip, the still-bluesy lengthy jam-like Rotating Irons and the poppy (still have to sell albums, right?) Near The Sea, all round up the album in a very pleasant manner.

Much an improvement over their debut album, BRI's second album is certainly the album you should start with along with its successor W.W.W. Although BRI is not absolutely essential to a proghead's collection, I find it still quite enjoyable and should you only have 5 albums from Denmark, BRI or W.W.W. are sure to take one of those spots.
Posted by Unknown at 7:34:00 PM 3 comments: 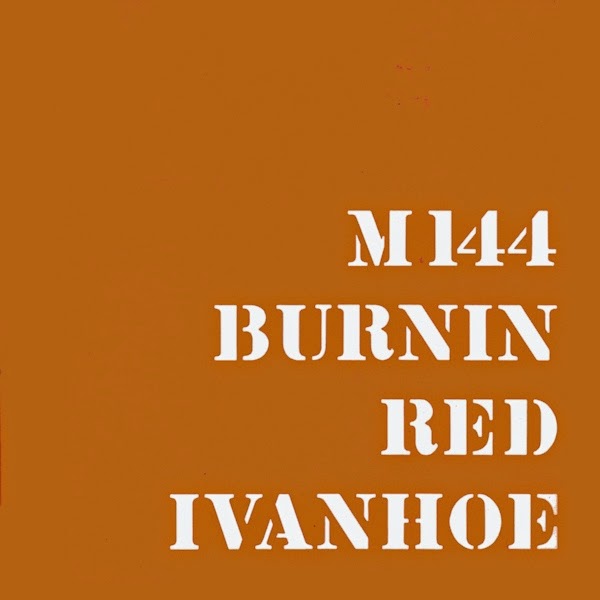 Burnin' Red Ivanhoe was formed back in 1967, and that makes them one of the first scandinavian prog bands. Their style was quite original from the start, blending jazz-rock with R&B, blues, psychedelia etc.. their debut from 1969 (double album) "M 144" sounds somewhat like THE WHO with jazz influences. Most of Burnin' Red Ivanhoe's albums have that certain scandinavian touch to it, similar to early 70's prog groups such as WIGWAM, CULPEPER'S ORCHARD and TASAVALLAN PRESIDENTTI. In 1971, the band released the album "WWW", which is probably a good place to start (for proggers), as it contains some of their most progressive and interesting work. The self-titled album they released in 1970 (another gem!), also contains the track "Secret Oyster Service", and quite soon after that, a new, even more jazz-orientated group was formed, called SECRET OYSTER. Burnin' Red Ivanhoe was disbanded in 1972 (although they released one more album in 1974), and as a result, most members moved over to SECRET OYSTER. Burnin' Red Ivanhoe is recommended for fans of early scandinavian prog rock.

M144 is the debut album from experimental Danish Jazz/ rock act Burnin´ Red Ivanhoe. Heavily rooted in the Danish jazz scene in the sixties Burnin´ Red Ivanhoe began to incorporate more rock influences into their music and soon had a good following in their native Denmark. M144 was released in 1969 and was one of the few Danish rock albums from that time with an international sound. The band enjoyed quite a success internationally especially in the UK where the album actually charted as one of the first foreign albums ever. Germany and the rest of Scandinavia were also markets for Burnin´ Red Ivanhoe.
M144 is a double album which was also something that was very unusual for Danish artists in 1969. The first LP has Danish sung lyrics while the second has English sung lyrics. About half of the songs are instrumental though. The lyrics are generally pretty fragmented and weird. I´m not sure but Ridder Rød ( Red Knight) does sound like there are some socialist thoughts put into it ( which was a very common thing in Danish lyrics from this time). Kaj is a pretty hilarious song about the lonely guy named Kaj who is only interested in girls on pictures. He lives with his aunt who is very interested in him ( censorship bip bip).

The album is full of great bluesy jazz/ rock tunes, very much in the vein of bands like Colosseum and Audience. Lots of brass and catchy hooks. Songs like Antique Peppermint, Medardus ( with vocals that remind me of Magma) and Saxophonepiece 1 and 2 are all excellent mostly instrumental jazz/ rock songs. Songs like Ivanhoe i Brøndbyerne, Ridder Rød, Marsfesten, Kaj and Purple Hearts also showcase Burnin´ Red Ivanhoe´s high level of compositional and technical skill. Ksilioy ends the album and I must admit that it´s a bit too much for me with the repetitive midsection even though the musicianship is outstanding in this song.

The CD version is a double CD with six added extra songs where Why Don't You Trust is the most exciting one. Kaj is there again in a version recorded in 1997.

The musicianship is excellent and all involved are higly skilled musicians. Especially the brass playing is of an extremely high standard.

What I enjoy so much about the album is that it never gets too jazzy. It´s always more rock music than jazz ditto and that´s how I like it. M144 is without a doubt one of the most groundbreaking releases in Danish music history and it´s a great progressive rock album as well.